My other half puts up with a lot. When I want to spend 3.5 hours on a train just so I can eat scones, he obligingly comes with me. For my birthday he spent months and loads of money planning a trip to Hadrian's Wall, in cold, wet February, because he knew that's where I wanted to go.

But everyone has their limits and his limit is Stonehenge. He HATES it. I'm not exactly sure why but it's something to do with it being "a massive rip-off" (his words) rather than any issue with Neolithic builders.

So I was really surprised when he agreed to go to Avebury. After all, Avebury is also about standing stones but they're more low-key, a bit Charlie Watts to Stonehenge's Mick Jagger. What if we drove the 80 miles to get there and it was rubbish?

Fortunately, there are lots of different things to see and do at Avebury:

1. Avebury stones
Avebury is the quintessential English village - it has houses and a pub and the usual road signs and cars and people buying the Daily Mail and eating bags of Quavers, just as you'd expect. But as you drive into that village, there they are - these big stones jutting out of the ground, just standing there for you to walk up and touch. It's quite a shock and I'm surprised there aren't loads of car accidents caused by drivers going "there it is! there's a stone!"...crunk. 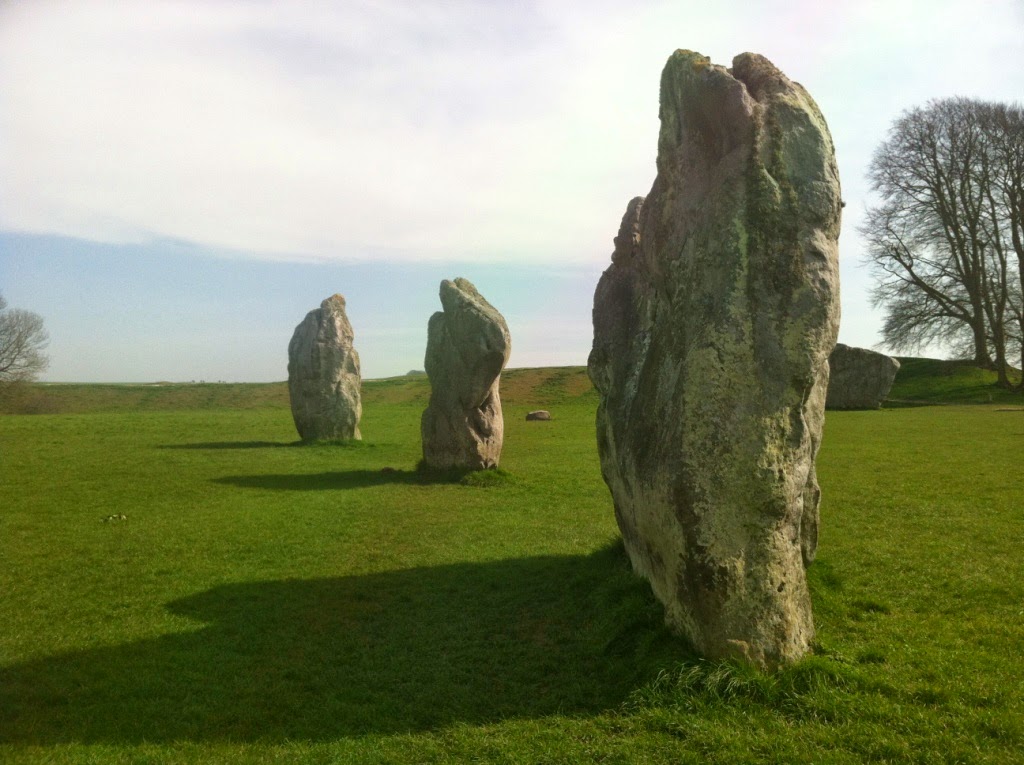 The stones are part of Avebury henge. A henge is a Neolithic earthwork, usually round or oval and consisting of a bank and ditch surrounding a flat area of ground. Avebury's flat bit is 340 metres across, surrounded by a ditch that measures three quarters of a mile.

Once upon a time there would have been 100 stones in the Outer Circle at Avebury: 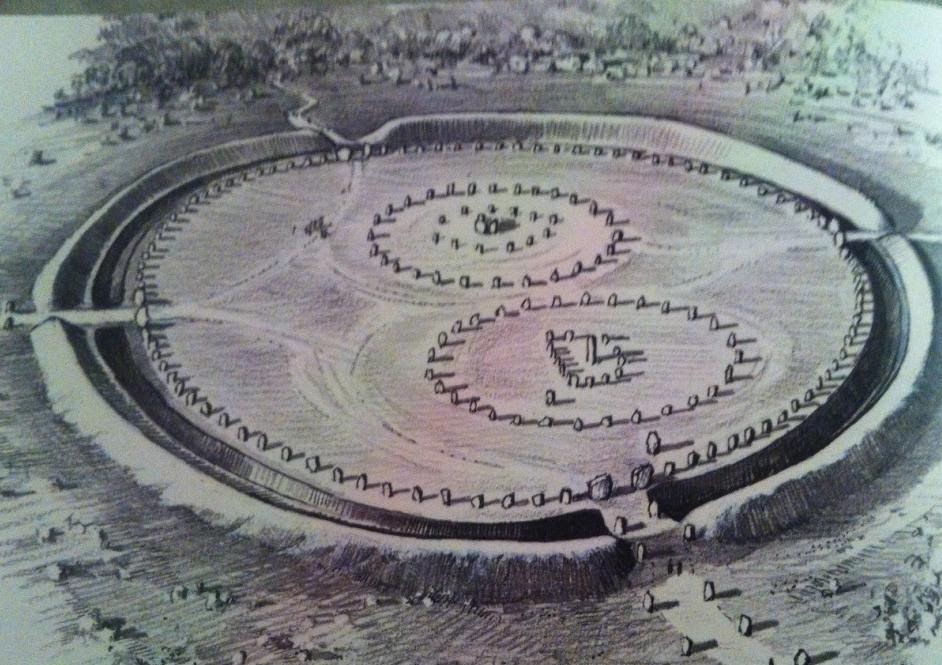 Today there are 36 stones standing within the henge. 15 of those have remained upright throughout time, so potentially since they were first put there in 2,600 BC or so. The other 21 were put back up by an archaeologist called Alexander Keiller during his excavations in the 1930s - they'd either fallen over or been buried.

And it's all a big mystery as to why it was created at all. Some think the stones are connected to the sky, the sun or moon, or to the seasons. They may have had religious uses. The henge may have been created for celebrating or contacting the dead. We just don't know. But it doesn't really matter - it's still a fascinating experience. 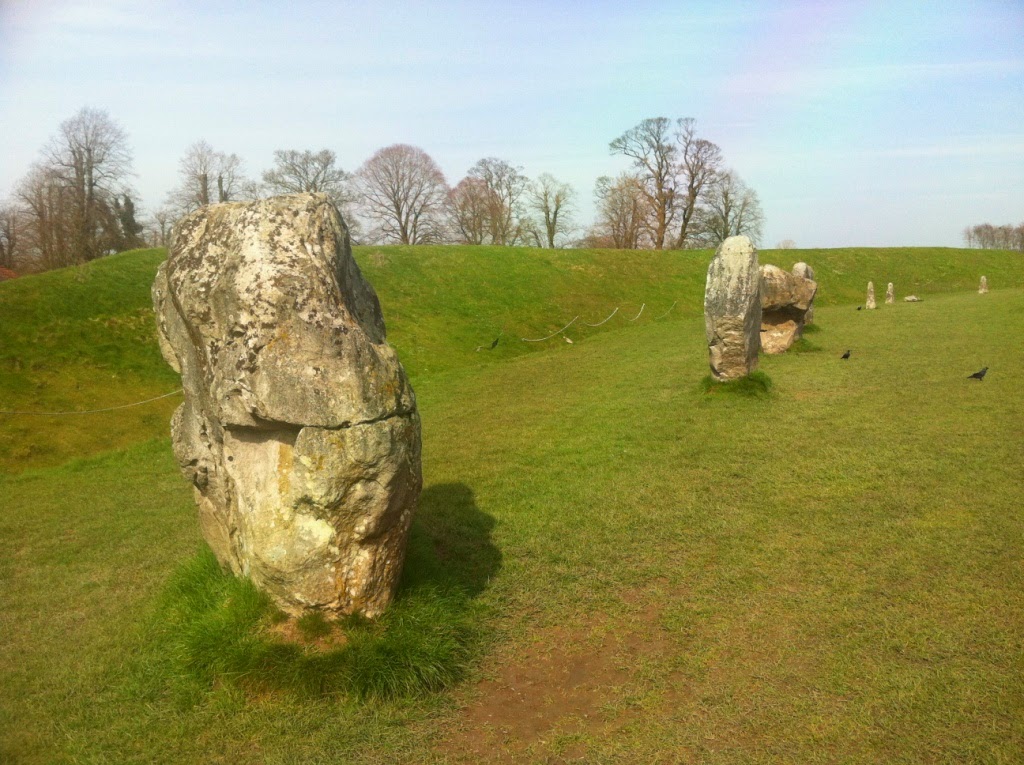 2. The museum
The museum is good. It's housed in a pretty barn and it has a helpful timeline showing when the various sites around Avebury were created. The section on Alexander Keiller is great; there are some short videos which really bring him to life as a person. He was heir to the Keiller marmalade business and spent his fortune on all sorts of interests, but mainly women and archaeology.

3. Avebury Manor
The Manor is only a five minute walk from the stones and it's a delight. It's one of those properties, like Mompesson House or Hughenden, where I could happily hang around until 5.30pm, hide in a cupboard, and then lock the door from the inside, refuse to come out, and live there forever. 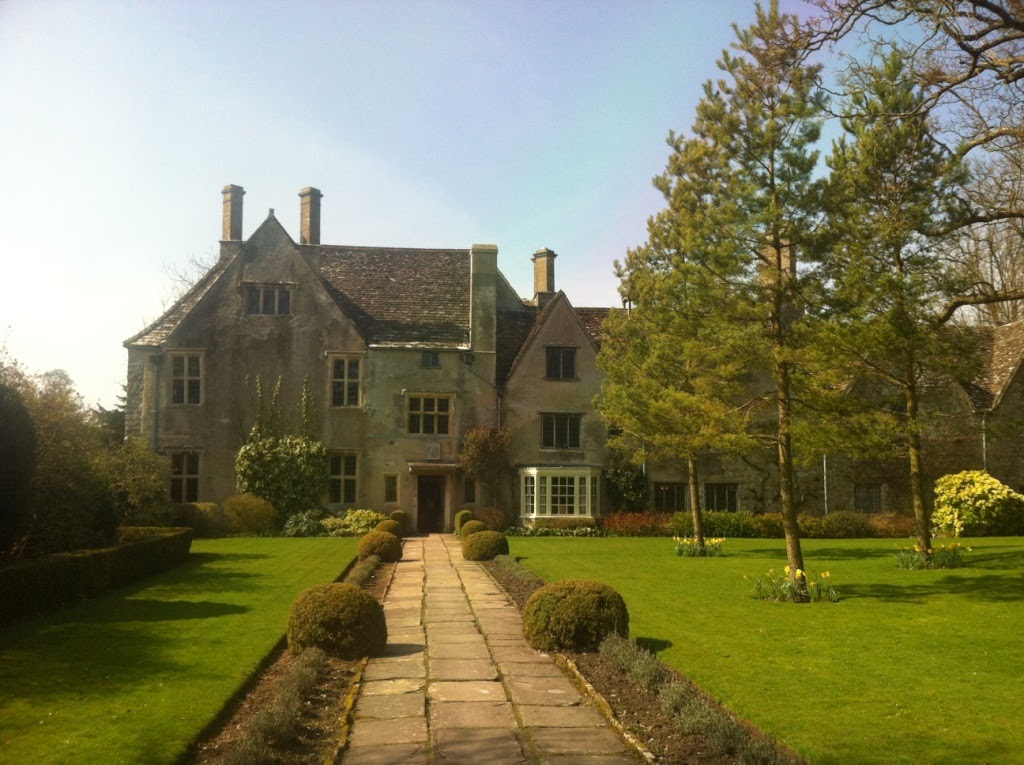 Three years ago, Avebury Manor was empty - the National Trust had bought it but, pretty as it was from the outside, inside it was all gaudy 1970s paintwork. An empty manor house isn't very appealing, so the Trust teamed up with the BBC for a programme called To The Manor Reborn. They redecorated it and filled it with furnishings in various styles - so the kitchen is laid out as it would have been in 1912, for example. (I haven't watched it but I will do so and report back on whether it's any good.)

There has been some sort of building on the site of the manor from Norman times, although the current building is thought to date from the 1500s. In 1935 it was bought by Keiller who used it as a base for his excavations. It's a lovely little place and the volunteers are particularly friendly and full of information. Some of the rooms are closed due to the fact that the floor is potentially about to collapse, which seems sensible enough to me, but one volunteer was particularly forlorn about this turn of events. They should give him a collection bucket - he'd have made a fortune from people donating to the restoration just to stop him being sad.

The Avebury Scone
Anyway. If Avebury itself was a bit of a surprise, then so were the scones. The tearoom was super-efficient and a cream tea of fruit scone, jam, and cream was served up very quickly. The scone was as fresh as could be with the perfect texture and it tasted...a bit odd, actually. I still for the life of me cannot work out what was in it but it had a really unusual tangy aftertaste. It was like strong cheese or balsamic vinegar or something - anyway, it wasn't a bad taste, it was just the first bite that was a bit of a shock. If anyone knows what the mystery ingredient is - let me know*. 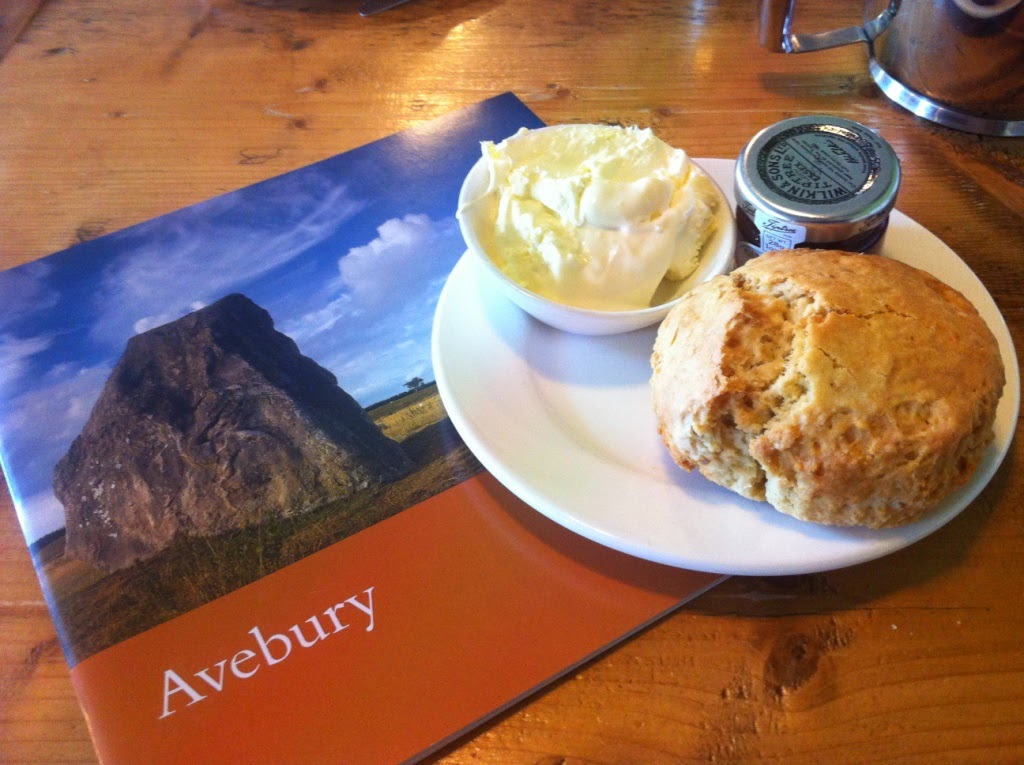 3. Silbury Hill
We ended our trip with a quick detour up the road to Silbury Hill. Silbury is 37 metres high, the largest prehistoric mound in Europe, and was created in 2,400-2000 BC. It really is a bit Close Encounters of the Third Kind. You stand there wondering what on earth is inside it - giant ants? a Bond villain? Vladmir Putin? - until you read the signs, which explain that archaeologists have tried to tunnel into it expecting to find treasures galore, but all they found was mud. And as a result of the tunnels, the whole thing started eroding and they had to fill in the tunnels and tell the burrowing archaeologists to go away. 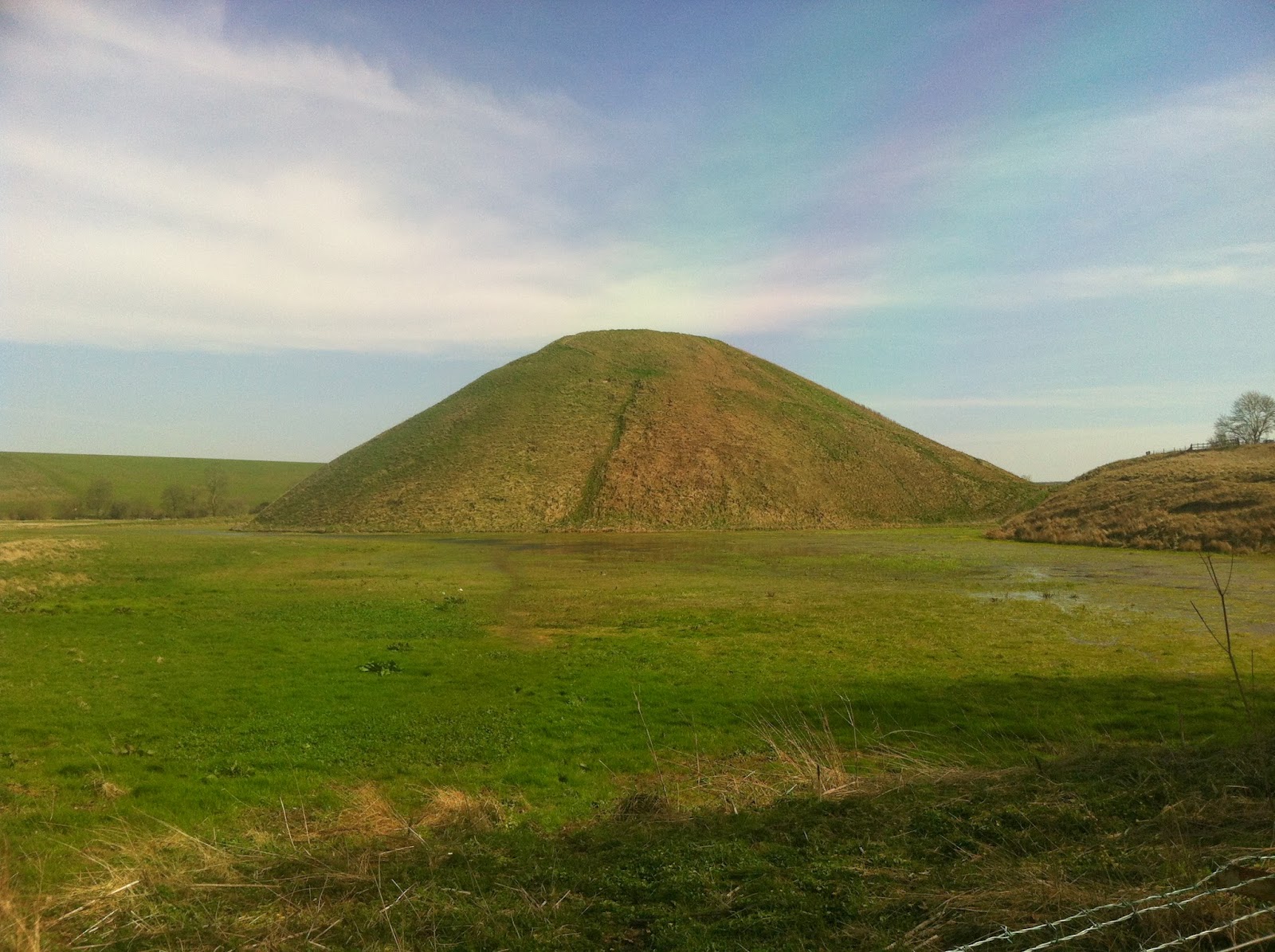 So Avebury gets a big thumbs up - put it on your list if you haven't been.

* The very lovely people manning the Avebury Twitter feed investigated the mystery ingredient for me the next day. They concluded that it was actually a cheese scone and the tangy stuff was mustard. However, both of our scones had fruit in and both tasted the same - maybe the mustard has snuck into the sweet dough? Like Avebury, it will probably remain a mystery.
Posted by National Trust Scones at 12:47

Email ThisBlogThis!Share to TwitterShare to FacebookShare to Pinterest
Labels: Wiltshire