If the National Trust has taught me anything at all, it is that the Tudors and Stuarts totally kick ass when it comes to being the most interesting people in British history. The Victorians give them a run for their money, but having one moody monarch for so long denied them the edge. The Tudors and Stuarts lived in far more interesting times. If I had to go and live in another era I'd choose the 1500s any day of the week, as long as I could take the internet and a flushing toilet with me.

The National Trust owns a lot of Tudor buildings but it was Hardwick Hall in Derbyshire that I really wanted to see. It was built by Bess of Hardwick, who was a major player in Elizabethan society.

Bess was an extraordinary woman. Here are my top five Bess facts, gleaned from Bess of Hardwick by Mary Lovell:
1. She had four husbands.
2. She built Hardwick Hall and Chatsworth.
3. Her brother-in-law once tried to kill her by poisoning her.
4. She and her final husband were responsible for keeping Mary Queen of Scots under lock and key for 15 years before Mary eventually had her head cut off.
5. She was a great friend of Lady Jane Grey before Jane also had her head cut off.

When you hear that someone had four husbands you immediately think of a black widow type eating men for breakfast (well, I do anyway) but Bess wasn't like that. Her first husband, Robert Barlow, died when she was 16 - they'd only been married 15 months. She had 6 children with Sir William Cavendish, before he died after 10 years of marriage. Then William St Loe died after 6 years together - it was his brother who had tried to kill Bess, and the same brother was with William when he died, so it was all very suspicious, frankly.

Her last husband was George Talbot, Earl of Shrewsbury. During their marriage, he was put in charge of keeping Mary Queen of Scots under house arrest so she couldn't stage any sort of coup against her cousin, Elizabeth I. The pressures of this led to Bess and George splitting up and having great big spats that Elizabeth sometimes had to step in and referee.

But although Bess loved her husbands, she was very canny. Her father had died when she was 7 months old and her mother had had a terrible time keeping hold of his assets, as his heir (Bess's brother) was not old enough to inherit, being only 2 at the time. Bess learned from this and as a result each marriage left her richer and richer until she was the second richest woman in Britain, after the Queen.

Hardwick Hall was built in 1590, after the Earl's death. Bess had been born at Hardwick, in the Old Hall, and she wanted to build something new and stupendous to show her wealth, power and status.

And the new Hardwick Hall is certainly stupendous. Bess's initials 'ES' feature on top of every turret, making it clear who built the place. It was designed by Robert Smythson and it was very unusual for its time:
1. It's symmetrical and most Tudor buildings were not
2. The private rooms are on the ground floor, with the public rooms up top
3. It contains a lot of windows. Glass was very expensive at the time and having a lot of windows was another statement of Bess's wealth. There was even a rhyme about it - "Hardwick Hall, more glass than wall". 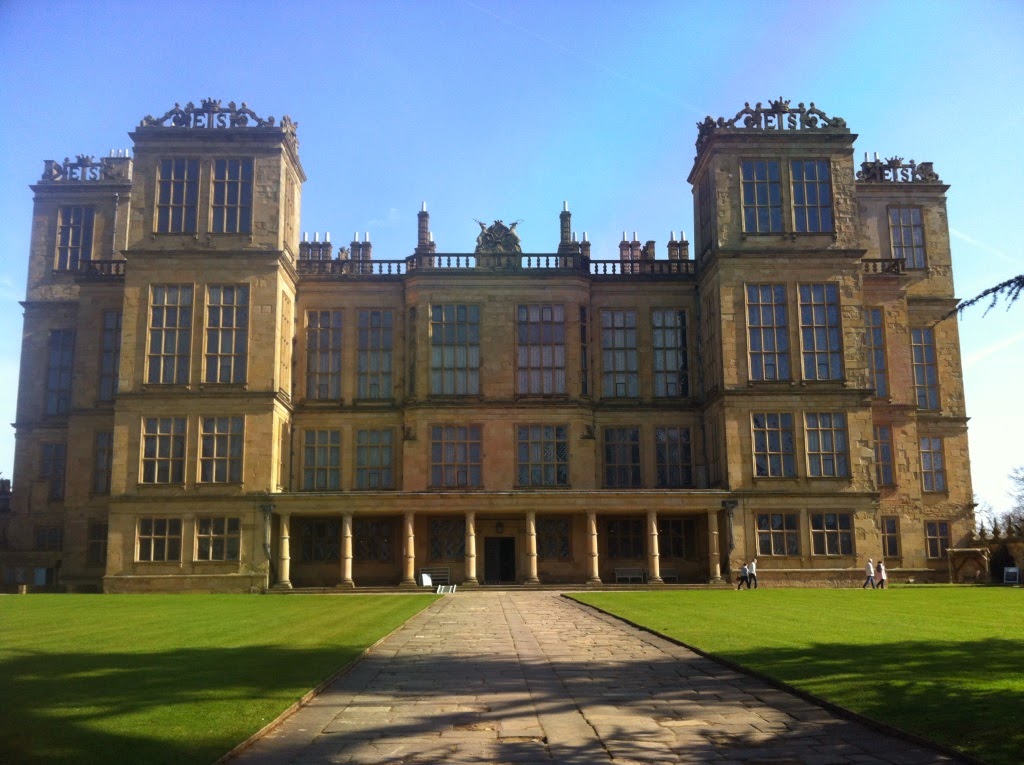 It's a very large house and many of the rooms are true show-stoppers that make you gape. There are also tapestries that have been in the house since the 1590s - because Chatsworth was the main family residence, Hardwick wasn't modernised as much as it might have been.

Hardwick also has a really distinct smell, which comes from the rush-matting that covers the floors. It was used back in Bess's time and is still used today. You can see it in this admittedly-not-great photo of the Long Gallery: 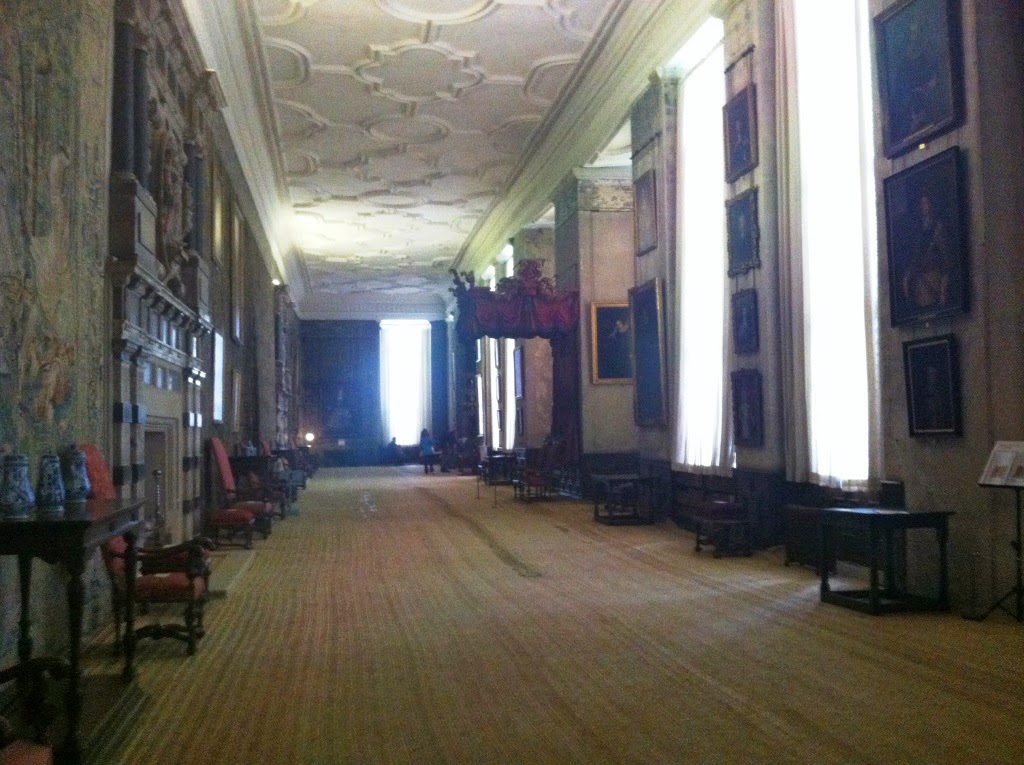 The Hardwick scones
And the scones? There's a really nice modern restaurant to the side of the Hall itself where a cream tea consists of two whopping scones, fruit, plain or cherry. A bit of eavesdropping led me to conclude that everyone - EVERYONE - in the tea room was discussing either the enormity of the scones or the missing plane in Malaysia. But the scones were very tasty - raspberry jam is not really my thing and they looked a tad dry when I cut them but they were actually very soft and chewy. 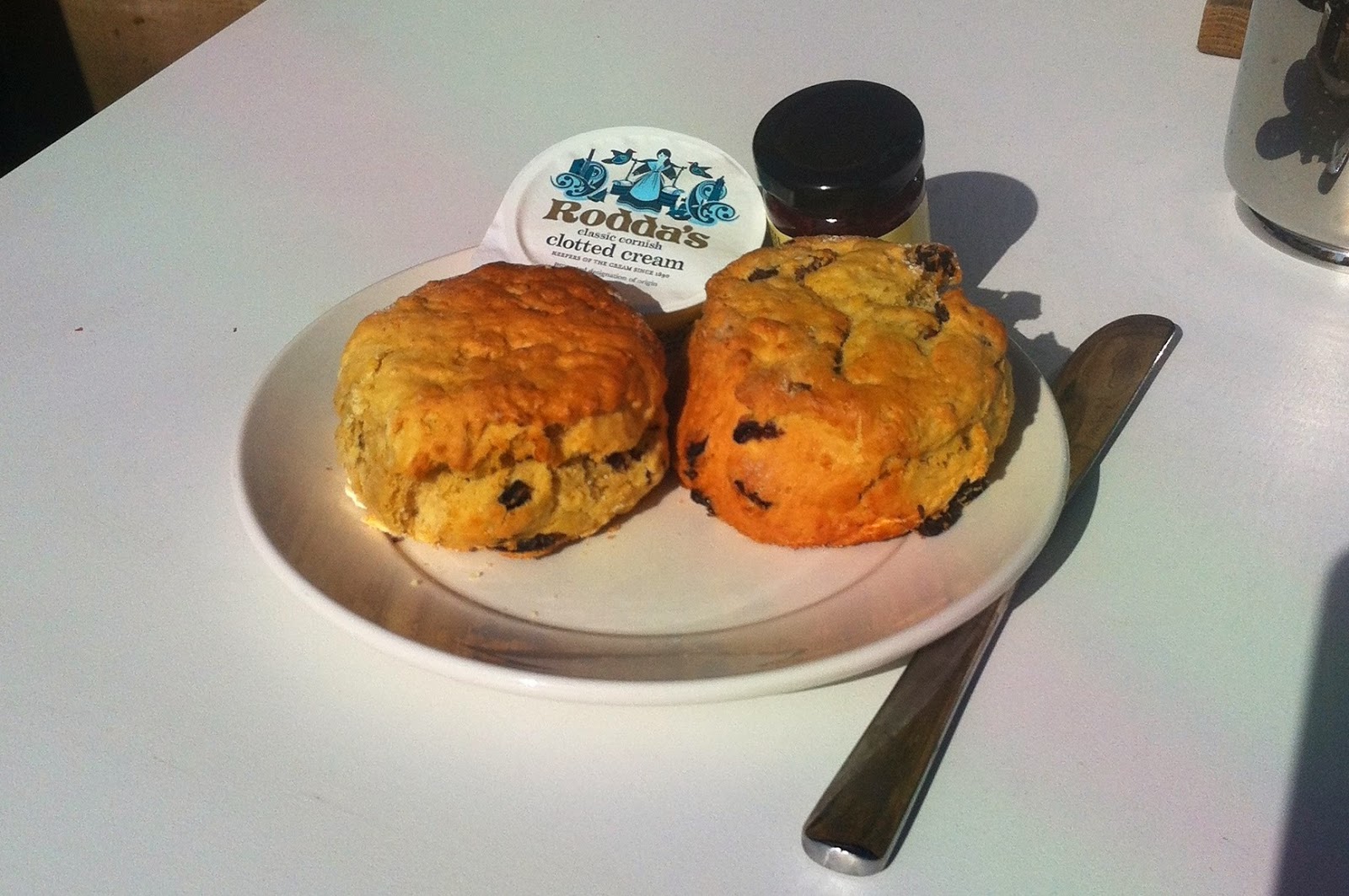 But you know what? I also had two less-than-great things happen to me today and I am going to tell you about them.

1. Visiting National Trust properties alone is not very enjoyable
This depresses me but I have to say it: I was on a solo mission today, as my other half was in Rome at the rugby, and it really wasn't much fun. I know that part of this is having no-one to talk to as you walk round and that's not the National Trust's fault - that applies wherever you are. However, why do NT staff have to say "Is it just you then?" when you're showing your pass at the entrance? It happened to me today at Hardwick and it happened at Lyme House last year (on three separate occasions in fact as I went round the house). Are they expecting me to suddenly remember that I left my husband and 3 children in the car? Or that I have secreted my mother under my coat?

2. My taxi driver on the way there was like Fred West
I am not an uncharitable person but he was horrible. My conversation with him went like this:
Him: "I couldn't be doing with stately homes."
Me: "Oh?"
Him: "Do you know how much they charge you to get in here?"
Me: "No."
Him: "An arm and a leg. More than £10 anyway. And then a cup of tea is £3 and all it is is a tea bag and water."
Me: "Right."
Him: "Do you know the only stately home I would go to?"
Me: "No."
Him: "Blenheim. Do you know who lived there?"
Me: (lying) "No."
Him: "Winston Churchill. Or Obersalzburg. Do you know who lived there?"
Me: (warily) "No."
Him: "Hitler."
(At this point I start seriously assessing whether I would be irreparably injured if I threw myself out of the moving car.)
Him: "Or The Kremlin, where Stalin lived. These houses here were just owned by the second cousin of some toff. And we pay for it! I would rather see where war leaders lived, someone who had actually done summat."
Me: (trying not to cry) "Right."
Him: "Look at it, there's nothing here but a few trees. They've not even put any deer in it! Mind you, you could bring a bird up here for nookie I suppose."
Me: "OK! Here's all my money! Thankyoubye!"

But even Fred West and being made to feel like a no-mates couldn't ruin the amazing experience of Hardwick. I definitely recommend it.