I picked the worst possible day to go to Knole. It was cold and wet and although that shouldn't have mattered, it unfortunately did. But I'll come to that later.

First, let me tell you about Knole itself. I had been reading Inheritance: the Story of Knole and the Sackvilles by Robert Sackville-West before I went. I absolutely love it when you find a rip-roaring read about a National Trust property - it super-charges the whole visit (see also Quarry Bank Mill and Gibside). So it was with Knole. I couldn't wait to see it.

Knole is enormous. It was apparently at one point a 'calendar house', with 365 rooms, 52 staircases, 12 entrances and 7 courtyards. It might not have all of that today but it's still impressive: 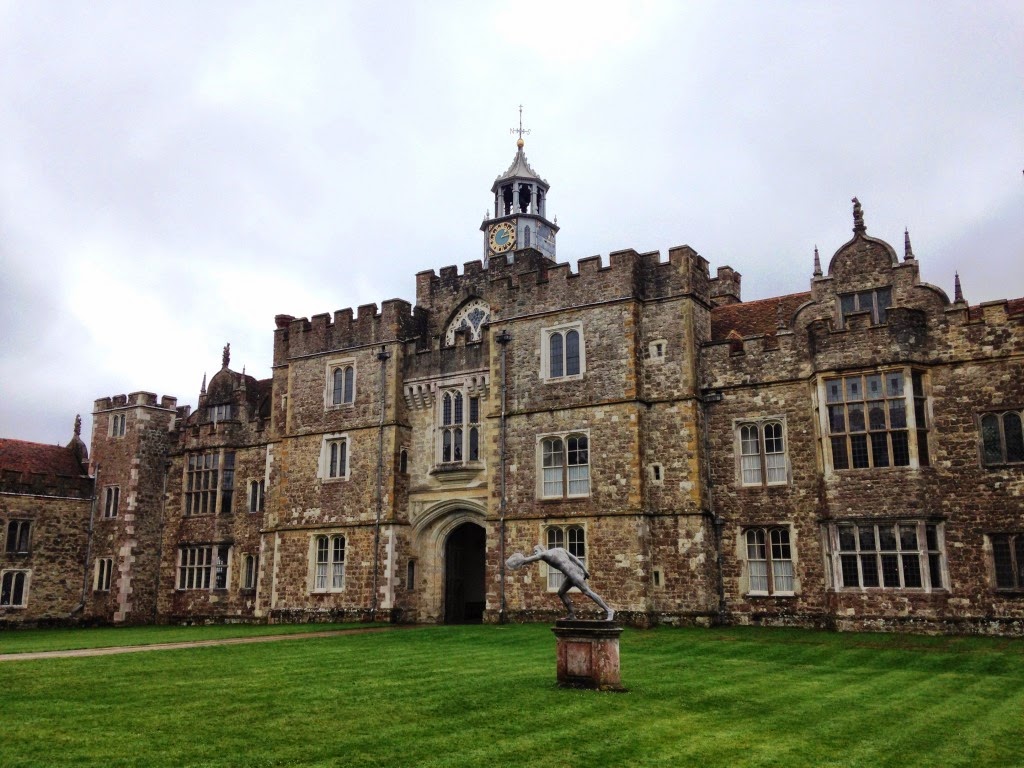 Knole also has the most fascinating history. Here are a few snippets:

1. Knole has been passed down through 13 generations of the Sackville family
Thomas Sackville, the first Earl of Dorset, had a nickname: Fillsack. Even by the standards of the 16th century, old Thomas liked to take advantage of his positions of authority (he was Lord Treasurer to Queen Elizabeth I), and he bought the freehold to Knole in 1605 with the intention of developing it to show off his massive wealth.

2. Knole - a fascinating example of primogeniture at work
Thomas had stipulated that Knole should be passed down from "heir male to heir male" and that did happen, sometimes. However, it often got stuck - famously so, when the 3rd Lord Sackville died and his only heir was his daughter, Vita Sackville-West, the author. As a girl, she didn't get to inherit - it went to her uncle Charles and then her cousin Eddy, much to her distress. In the past 200 years, Knole has only ONCE been handed from father to son - every other handover has been fraught with widows or daughters or SOMEONE being disenfranchised.

3. Lady Anne Clifford - another fascinating example of primogeniture at work
Anne Clifford married Thomas's grandson, Richard, in 1609. She kept a detailed diary, basically documenting her miserable life. Her marriage had started well enough but it was essentially a business deal - she came from a powerful northern family - and she ended up having to fight for the assets she brought with her, which damaged her relationship with her husband, the 3rd Earl. When he died (from eating too many potatoes, apparently) she had to hand Knole over to her brother-in-law. However, she had the last laugh when she ended up inheriting her old Clifford estates back.

4. Charles Sackville - the Restoration rake
Charles, the 6th Earl, was a bit of a lad. His antics read like a non-stop stag do. He inherited Knole in 1677 following its 'interesting' time during the Civil War. The 4th Earl, Edward, fought alongside Charles I - as a result Knole was taken away from him, plus his younger son was murdered. Knole was eventually restored to the Sackvilles and the 5th Earl, Richard, tried to put things back in order. His son, Charles, wasn't really one for order - Nell Gwyn was his mistress for a while, before he handed her on to Charles II, and he liked having a good time. However, he also managed to impress influential people. One of the 'perks' of his role was to dispose of anything not needed at Whitehall, so he disposed of it in his own home at Knole, creating a very fine collection of Stuart furniture. Whitehall burnt down later and everything went with it, while anything saved at Knole is still there today.

5. The end of the Sackvilles? Not quite.
Lionel, Charles's son, also managed to impress influential people - he escorted George I over from Hannover and was made 1st Duke of Dorset for his pains. He was succeeded by another dissolute Charles, who spent most of his time drunk on the Grand Tour, and cut all the trees down at Knole. His nephew John was a patron of the arts - the rather astonishing nude statue at the bottom of the staircase is his mistress, Giovanna Baccelli. The 4th Duke was killed in 1815 at the age of 21 in a hunting accident. What then ensued was nearly 200 years of a family tree with branches going hither and thither, the name changing to Sackville-West, and then the branches mingling back to produce Vita Sackville-West and eventually resulting in Robert Sackville-West, the 7th Baron Sackville, who lives at Knole today with his wife and three children. Exhausted? I am.

Knole has also been immortalised in literature over the years. In Vita's novel, The Edwardians, Knole is renamed Chevron. And Virginia Woolf, who was Vita's lover during her strange but apparently happy marriage to Harold Nicholson, based Orlando on the Sackville history.

The National Trust refers to 'showrooms' at Knole, which I initially found quite odd. However, it's an apt description. The rooms that are open to the public are breathtaking in their scale and in the age of their contents - chairs that James I and Charles I actually sat on, for example - but it reminded me of the Sistine Chapel. You're there to marvel at it all and not feel any sense of home or personality. And to be fair, that's what Knole has always been: a showcase.

Knole is also strangely dark. The Trust must be waging a massive, constant battle against damp and all of the problems that come with it. However, there is something very special about a property that has remained within one single family throughout history. And the rooms are awesome - they're absolutely unlike anything else, and you really must see them.

But there's one room that's missing at Knole at the moment and that's a tearoom. As you know, I am one of the National Trust's most loyal supporters but even I have to question the decision to have an Outdoor Cafe at Knole while the indoor one is being renovated until 2016. This was the Outdoor Cafe at 2pm today (a Sunday): 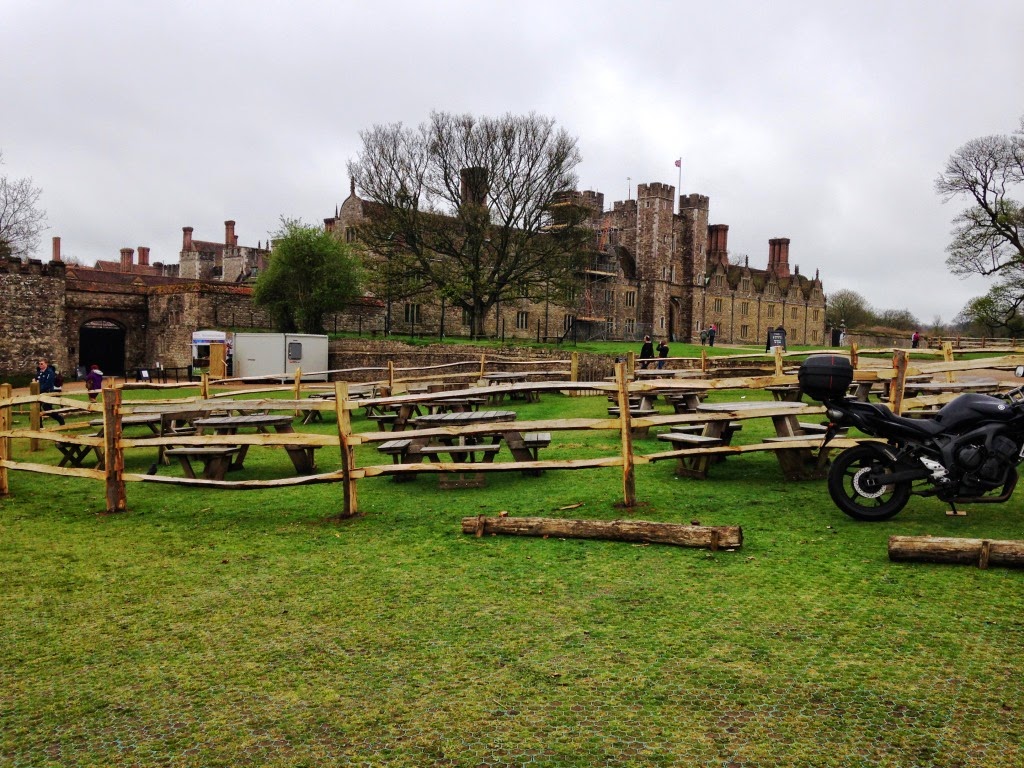 As you can see, it's very outdoor and completely open to the elements. And it's not the National Trust's fault that I decided to go to Knole on a cold and wet day but let's face it, any summer in the UK is a 50:50 on the weather.

Anyway, even with my enthusiasm for scones, I didn't really fancy it. And I don't know if they had any scones anyway.

BUT! Scone disappointment aside, Knole is definitely worth a visit and Robert Sackville-West's book is fantastic, so give it a read: Inheritance: the Story of Knole and the Sackvilles.