If there was an award for National Trust Property That Doesn't Look Very Interesting But Turns Out To Be Brilliant then Clouds Hill would win it.

And I'm sorry if that offends anyone but it's true. When I looked up Clouds Hill on the National Trust website, this is the first thing I saw: 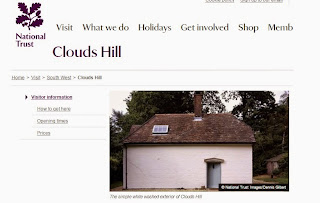 But I've watched enough episodes of A Touch of Frost to know that you have to look beneath the surface of these things. WHY, I asked myself, would the National Trust own a little windowless cottage?

The answer is Lawrence of Arabia. The great TE Lawrence used this little place as his rural retreat from 1923 until his untimely death in 1935: 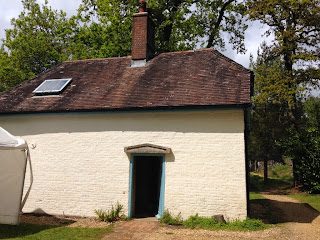 And in fact, until today, that is all I knew about TE Lawrence - that he was killed in a motorbike accident. Here are some other facts about him and Clouds Hill:


The rooms at Clouds Hill are fascinating. It somehow manages to be austere and yet cosy at the same time. My favourite feature was the enormous gramophone - Lawrence was a music buff apparently and had the latest hi-fi equipment. You can just about see it on the right in this very poor photo: 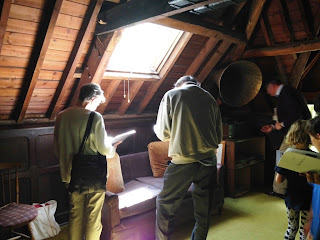 There were no scones at Clouds Hill - there was no anything at Clouds Hill - but it didn't matter at all. It's a fascinating little place that gives an insight to a very interesting man and I highly recommend it.

Email ThisBlogThis!Share to TwitterShare to FacebookShare to Pinterest
Labels: Dorset