But I needn't have worried about Emmetts Garden in Kent. It has something for everyone. It has space to play games if you're that way inclined, it has woodland walks, it has areas like the Rose Garden where it is very clear what type of plants you are looking at so you don't feel like a dunderhead for not recognising anything. And the Rock Garden is very nice: 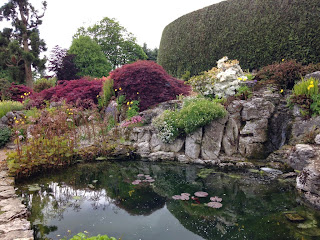 There's also a pinetum. The National Trust has given me many things in the two years since I joined it, but the word 'pinetum' must be in the top three. Unfortunately, it's very hard to take pictures of a pinetum - my photos mainly show a spindly Christmas tree so I'll just leave that to your imagination.

Emmetts started life as a farmstead. The house was built in 1860 and in 1890 it was bought by Frederick Lubbock and his wife, Catherine.

Frederick transformed the gardens at Emmetts, following the design principles of Gertrude Jekyll and William Robinson. Frederick's style of informal planting can still be seen today. 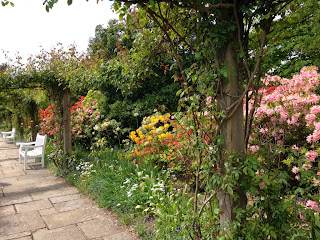 From 1928, Emmetts was owned by Charles Watson Boise and his wife. He bequeathed it to the National Trust in 1964.

I bought a guidebook at Emmetts today wondering how they were going to fill 32 pages without a house to talk about. But it turned out to be guidebook gold, containing really interesting background information on Victorian plant-hunting and some startling facts:

The Emmetts Garden scone
Anyway, let's move on to other golden matters. If there were such a thing as Scone Vogue and if I were editor of it, then I would be heralding the 2015 Spring-Summer scone trend as 'well-fired'. Today's scones at Emmetts Garden had definitely enjoyed a longer-than-average stay in the oven, as had the scones at Studland Beach last week. This, in my book, constitutes a trend.

And I have to say; it's a risky scone strategy. A fresh scone usually tastes nice whether it's well-baked or not. But a well-baked scone that's 2+ days old is usually a horror story involving a dental bill.

But for the second week running, my concerns were misplaced. The Emmetts scones were really, really tasty, just like the Studland scone. I came close to awarding a 5 out of 5 but they were just a touch on the dry side, so it's a 4.5. But very enjoyable. 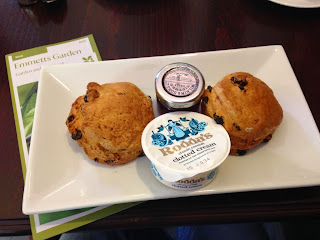 So a successful mission all round - delicious scones and I didn't come home with a car-boot full of azaleas.

Emmetts Garden: 4 out of 5
Scones: 4.5 out of 5
Bonus points for reminding me of the most excellent word 'pinetum': 5 out of 5
Posted by National Trust Scones at 07:09