If this blog ever wins the Pulitzer Prize - you may have to humour me here a bit - I would have to devote a good chunk of my tearful acceptance speech to thanking my long-suffering Scone Sidekick. He puts up with a lot in supporting this National Trust Scone Odyssey. He is the wind beneath my scones.

Today's trip to Dunham Massey was a treat for him, as he is very interested in warry things. Dunham has a colourful history dating back centuries, but in 1917 the owners agreed to turn it into an auxiliary hospital for injured troops. To mark the centenary of World War I, the National Trust has recreated the Stamford Military Hospital, as it was known, and for a short time you can see how it would have looked back then. 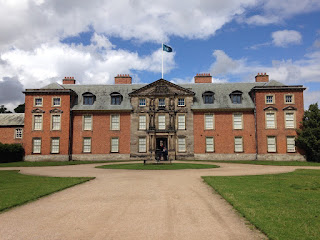 Dunham Massey - the history of the estate
The original Dunham Massey house was built by Old Sir George Booth in 1600. The Booths were very involved in politics during the Civil War, just about staying on the right side of things as the tides turned.

George's great-grandson, Henry Booth, was made 1st Earl of Warrington by William III but it all turned sour and Henry ended up deeply in debt. His son George married a wealthy heiress - although the marriage was unhappy, he saved Dunham Massey.

The 7th Earl was quite a character - he first married a bedmaker's daughter called Bessy and then a circus performer called Catherine Cocks. She was rejected by local society, so the Greys left Dunham and did not return for 50 years.

The 9th Earl, William Grey, started to restore the place in 1906, but died suddenly in 1910 when his son Roger was just 13. Roger eventually continued the restoration of Dunham but never married and gave the 3000 acre estate to the National Trust in 1976.

Stamford Military Hospital
Dunham wasn't the only National Trust property to be used as a hospital during wartime - Clandon Park created an operating theatre in one room last year in commemoration of their involvement.

But the Trust has really gone one further at Dunham Massey. The Saloon, which usually looks like an Edwardian sitting room full of swagged curtains and polished tables, has been transformed into a 14-bed hospital ward. It smells of antiseptic and there are audio recordings of gassed soldiers struggling to breathe - it's grim but it brings the whole thing to life in a very real way. 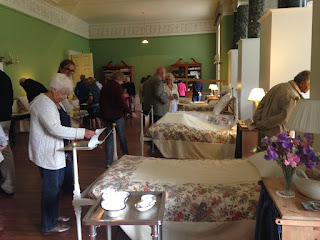 There were 3,300 auxiliary hospitals in Britain during the War. Dunham Massey was chosen because it was near Manchester and only three people lived there at the time (Lady Stamford, her son Roger the 10th Earl of Stamford, and her daughter, Lady Jane). Lady Stamford became the Commandant of the hospital, while Lady Jane worked as a nurse.

The very excellent guidebook explains how an injured solider would have made it from no-man's-land to a place like Dunham. He'd have started off being carried by a stretcher bearer to a regional aid post, then he'd have been moved to an advanced dressing station, then a main dressing station, followed by a casualty clearing station, followed by a general hospital and then back to the UK to an auxiliary hospital. How anyone survived that is beyond me.

And that's actually where the National Trust has done a particularly fine job. It's clear that Lady Jane and the other nurses devoted every single bit of their energy to looking after the men sent to Dunham. And yet you're quietly reminded of the utter futility of the whole thing, thanks to poignant stories of the soldiers that DID survive the journey - one lad went to war when he was 15, got injured and was sent to Dunham to be patched up, only to be shipped back out to the trenches and killed a month before the Armistice. It's a very sobering experience.

The operating theatre at the time was located at the bottom of the staircase and they've recreated that too. The photo below might give you some idea of how incongruous the whole set-up was - the historic grandeur of the house providing a bizarre backdrop to a primitive, yet life-saving medical facility. There's an excellent audio recording of Lady Jane talking about how she assisted with operations, including a gruesome description of trepanning into some poor solider's head. 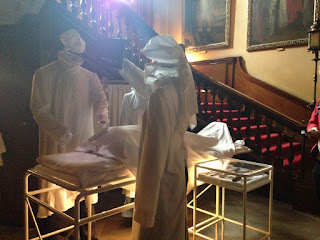 The Dunham Massey scone
And on that totally inappropriate note, I am going to move on to the matter of the scones. It is exactly two years since I started this National Trust Scone Odyssey and I really wanted the anniversary scone to be a good one.

The Dunham scones were formidable to behold - generously proportioned, very fresh, with a crunchy exterior and fluffy inside. 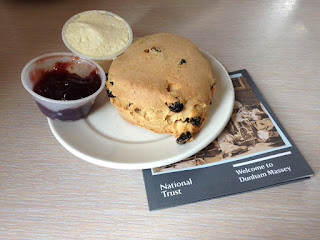 In fact, the only thing that stopped the Dunham scone from getting a 5 out of 5 was the cream. It was a bit odd. The other 80+ NT scones that I've encountered on this odyssey have all come with clotted cream, whereas the Dunham cream looked and tasted like that squirty stuff, ie it tasted of nothing at all. The scone would definitely have benefitted from a bit of a boost but it was a good scone and I was DELIGHTED to see it on this very auspicious occasion.

So I highly recommend that you visit Dunham while the Stamford Military Hospital is still on view - it's only going to be there until October this year I believe, so get along if you can. The National Trust has done an impressive job and it's well worth a visit.

Dunham Massey: 5 out of 5
Scone: 4.5 out of 5
Lady Jane's description of trepanning: 0 out of 5 if you're very squeamish
Posted by National Trust Scones at 13:20