I love the National Trust more than is probably advisable, but they do have a tendency to remind you on a regular basis that you are a bit of a thicko. I mean that in an affectionate way. They're like a clever uncle that always knows more than you, even when you've tried really hard to swot up on something in advance of his visit.

What made it worse was that they also used the word 'minstrel' at one point and helpfully put '(musician)' after it. I cannot be the only person who knows what a minstrel is but wouldn't know a chamfered pilaster if it hit her in the face? Anyway. Don't play Scrabble with anyone who writes National Trust guidebooks is my advice.

Let's move on, because I am doing Little Moreton Hall a massive disservice by not focusing on the charming wonkiness of their beautiful Tudor house, chamfered pilasters and all. 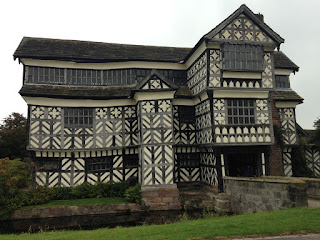 Here's a bit of background:
The hall itself is built around a lovely courtyard, leading to the various rooms. The Long Gallery was my favourite room. It sits on top of the house and it caused all sorts of structural problems - these already needed fixing in 1658, and serious remedial work was also carried out in the 1890s. More work was done in 1979 and again in 1990. It's frankly a miracle that the house is still standing. 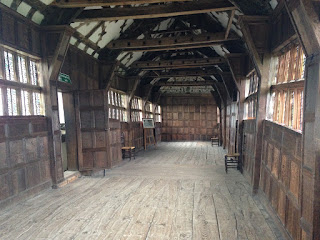 The Little Moreton scone
I said that the Long Gallery was my favourite room but of course that's not quite true. The tea room at Little Moreton Hall is situated in the old Tudor kitchens - I do love a tea room located in the historic building itself, although I do also love the big modern stand-alone tea rooms that you find at other properties, so the National Trust really can't lose where I am concerned.

Anyway, the tea room was very cosy on a nippy October day and they had a good supply of scones. I split mine as usual and bit into the bottom half, which seemed a bit dry. Then I ate the top half and it was lovely. So go figure - I'm starting to wonder if I will ever truly understand scones. 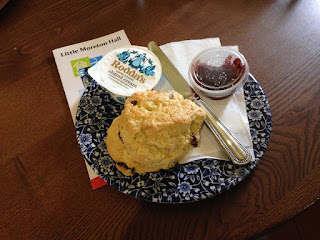 I hate to finish by going on about the blooming guidebook AGAIN but I need to tell you that today I went all thoroughly modern scone blogger by buying the guide online before I set off on my trip.

I basically wanted to see if pre-reading about the place improved my visit. And I can report that in some ways it didn't help - I actually felt a bit stupid swiping through pages on my iPad trying to work out which room I was in.

But it really did make a difference in other ways. This stained glass window, for example, has a barrel (known as a tun) and a wolf with its mouth open (a mouth being known as a maw), thus making it a depiction of 'More-ton': 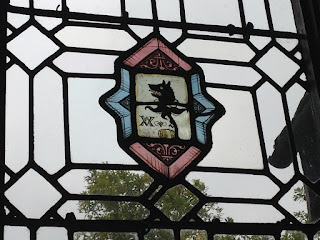 I would never have noticed this in a thousand years if I hadn't read the book beforehand. None of the other visitors seemed to have noticed it either, which made me feel like the cleverest person in the place. So there we have it; the National Trust might make you feel like a thicko compared to them, but read the guidebook and they make you feel very intelligent compared to everyone else.

I still don't know what a chamfered pilaster is though.

Little Moreton Hall: 5 out of 5
Scones: 4 out of 5
Likelihood of me ever knowing every word in a National Trust guidebook: 0 out of 5

Posted by National Trust Scones at 14:08