I am not generally a fan of abbeys. I have had two bad abbey experiences; I visited Whitby Abbey about 6 years ago and am still paying off the entrance fee. And Westminster Abbey was guarded by the rudest doormen I have ever encountered, and I have been to some very questionable nightclubs in my time.

But I made an exception for Calke Abbey in Derbyshire for two reasons:
1. It's the 12th most popular National Trust property, with 314,000 visitors last year
2. It came in for some very high praise by Bill Bryson in his book, The Road to Little Dribbling. 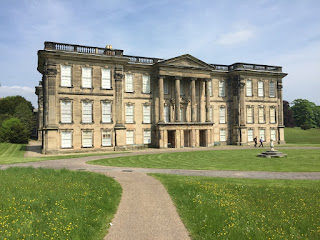 And from what I saw of Calke, it deserves the plaudits. However, I had a bit of a disastrous day and I didn't see much of it at all - more of that later.

First, let me tell you what I learned about the slightly bonkers history of Calke Abbey:

1. It was never actually an abbey
Calke was an Augustinian priory, founded sometime between 1115-1120 - the word abbey was only added in 1808 as a bit of vanity. The priory was dissolved in 1538 during the Dissolution of the Monasteries.

2. It was owned by the same family for 360 years
The Harpur-Crewes owned Calke from 1622 until 1985, when it was given to the National Trust. It was Sir John Harpur, the 4th baronet, who built the house we see today between 1701-4.

3. It got a bit weird after 1789
From 1622 to 1789, the Harpurs sound like your usual well-to-do types - bit of politics, marrying into other local wealthy families, surviving the odd religious skirmish/being on the wrong side in the Civil War etc.

But then Sir Henry came along. He was slightly odd, in that he hated having to communicate with other people and went to great lengths to avoid it - he wrote letters to his own staff, for example, and built a tunnel in the garden so he could go for a walk without having to see his gardeners. He didn't cut himself off entirely - it was he who added the 'Crewe' to the family name in a bid to get a peerage, and he managed to start a relationship with a lady's maid called Nanette, who he eventually married, to the outrage of everyone.

4. The "congenital unsociability" continued until 1981
Sir Henry was killed in 1819 in an accident. His son George was more sociable, but then his son, John, was "averse to public life" and rarely seen outside of Calke. And then came Vauncey who was even worse, often communicating with his own children by letter. His grandson, Charles, continued the theme and from 1949 to 1981 Calke was pretty much closed to the outside world.

5. The Trust has a policy of preservation, not restoration
As well as being unsociable, a lot of the Harpur-Crewes did very little to improve and maintain the house. Vauncey, for example, preferred to spend his money collecting stuffed birds and filled the house with them. When the Trust took over, they cleverly decided to maintain Calke as "an unstately home", showing what a decaying house looked like in the middle of the 20th century.

This means that the Trust is preserving everything, without actually restoring it - nothing should decay any further, but it's not being polished and restored to its original brilliance. This dog is a good example of what 'preservation, not restoration' means. Apparently it was initially sent off to be fixed, but then the Trust changed their minds and decided to stick with the matchbox for a foot arrangement: 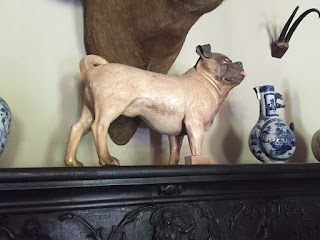 So what went wrong with my visit today? First, I made the mistake of trying to visit Calke using public transport. This turned out to be like Mission Impossible, if you replaced Tom Cruise on a high speed motorbike with a man called Ron driving an Arriva bus. My carefully crafted plans fell to pieces and I ended up having just 1.5 hours at Calke. Calke has 58 rooms. This was not going to work.

And it breaks my heart to admit this, having ridiculed other people for the same mistake, but I also got the opening times wrong. In my defence, the website said 11am but I didn't read the small print, which explains that from 11-12.30 only 3 rooms are open. So that's all I saw.

The day was saved though by Peter the guide. I think I was his first customer of the day, and he very enthusiastically offered to explain the conservation of metal to me. I'll be honest; my heart sank. I only had 45 minutes and I have very limited (ie no) interest in metal conservation. Plus the other guide rather ominously said "don't keep her long, Peter" in a way that suggested other visitors had been led away and only released 3 weeks later, dazed and requiring medical attention.

BUT! Peter was great. He showed me to the kitchen - a huge, damp cavern of a room - and pointed out a small metal pot that the NT has divided into sections and treated with different methods (eg wax and a buff, wax and no buff) so they can work out how to preserve everything. It was really interesting, and he was very amusing.

And so onto the Calke Abbey scones.

I was feeling a bit harassed by the time I got to the cafeteria, but one glance cheered me up immensely; two big piles of generously sized scones awaited me. "Fruit or plain?" the woman asked. If I had taken just ONE second longer, I would have seen that the plain ones were bigger and more photogenic. "Fruit please," I said, and she handed me a plate containing the smallest, most misshapen scone in Derbyshire.

I wanted to lift up my glasses and say "It is I! The National Trust Scone Blogger!" But I didn't do that, because a) she wouldn't have known what I was talking about and b) I wasn't wearing any glasses.

So instead I carried my little scone to a table and cut into it. It looked dry. At this point, I felt like throwing the whole thing onto the floor. But I persevered and was amazed to discover that it was an excellent scone - crisp, tasty, perfectly baked. I am going to deduct half a point for its diminutive size though - at £5.20 for a cream tea, you have to expect a decent size scone. If Tom had been there, he'd have sorted it out. 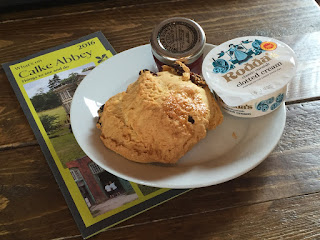 So I'll be heading back to Calke Abbey for another look - it's a fascinating property and definitely worth a proper visit.