I try to avoid National Trust gardens, as they are very dangerous places. I always end up walking around thinking "A white garden - what could be simpler. I could definitely do this at my house," while ignoring stuff in the guide book like "Hidcote took 30 years to create" "the owner was a very rich man" "there are 9 full time gardeners at Hidcote" etc.

But I threw caution to the wind today and went to Hidcote near Chipping Campden in the Cotswolds. And I'm very glad I did, because it's a beautiful place. 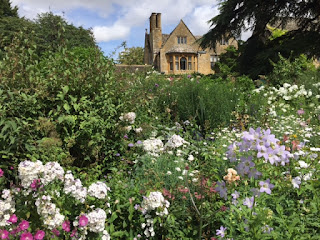 Here are some highlights:

1. The manor house!
The house was originally built in the late 17th century as a farmhouse. It was bought by Lawrence Johnston and his mother in 1907. 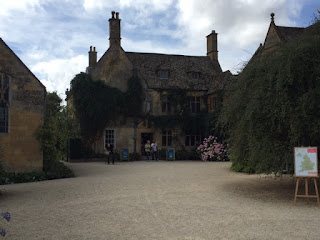 2. Gertrude Winthrop!
Gertrude was the mother of Lawrence Johnston. She was from a wealthy New York family (they made rope) and she married Lawrence's father, Elliott, who was from a wealthy Baltimore family (they were bankers). They got divorced and she married a wealthy man called Charles Francis Winthrop (he was a retired stockbroker). When Lawrence decided to settle in the Cotswolds, she came with him and bought Hidcote.

3. Lawrence Johnston!
Lawrence spent his early life going back and forth between Europe and the US. In 1900 he became a British citizen and joined the Northumberland Hussars to serve in the Boer War. While he was with them, he decided to find a permanent residence and came across Hidcote - it was perfect, both for the many friends he had in the area and because it allowed him to pursue what became his life's work; plants and gardens. 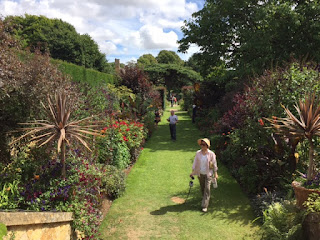 4. Development of the garden!
Johnston started work on the garden right away, creating 'garden rooms' around the manor house in the Arts and Crafts style. There was a hiatus while he went to fight in the First World War, but the 1920s and 1930s were the glory days of Hidcote. It was visited by Edith Wharton, Vita Sackville-West, and other eminences. 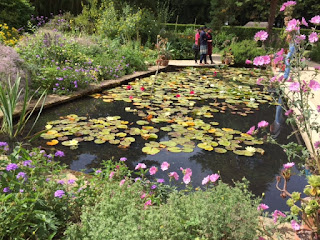 5. The gardens today!
There are 37 areas listed on the map that you can walk round, although I was surprised at how tightly packed it all was - you can easily walk round it in less than an hour, although if you actually want to look at the plants then you'll need a lot longer.

There's a White Garden, a Maple Garden, the Red Borders, a Fuschia Garden, a Pillar Garden with clipped yew trees as below, and lots more; 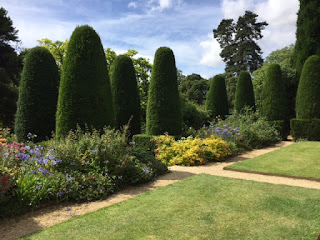 There's also a bit of wildlife wandering around; the Scone Sidekick decided to investigate a bustle in a nearby hedgerow at one point, expecting to find a squirrel, and nearly had his head taken off by an annoyed cockerel.

6. The National Trust!
Lawrence eventually decided to move to France, where his mother had bought a place. He contacted James Lees-Milne at the National Trust to see if the NT would take on the upkeep of Hidcote. We have seen before that James L-M was not the kindest of people - he described Lawrie as "a dull little man" who was "mother-ridden". Anyway - the NT wasn't sure about the idea and then they were and in 1948 the papers were signed.

7. The Hidcote scones!
I had another scone scare today, following my Room 101 scenario at Kedleston Hall last week, where I saw a waiter walking around with a sign saying "SOLD OUT - FRUIT SCONES". Stuff of nightmares.

Anyway, I joined the tea queue today and realised that there were only two scones left on the counter and three people in front of me. Even with my poor maths, I knew I was in trouble.

I also knew I had to act fast. I recalled a Victoria Wood sketch where the Julie Walters character tries to take the last two croissants and so Victoria grabs them and licks them. However, I wasn't sure that this would go down too well in a National Trust tearoom? Luckily, by the time I had talked myself out of that course of action, the three women in front of me had decided to stick with coffee only and so I was able to seize my scones without being thrown out. 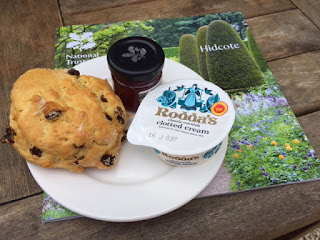 The trouble with taking the last scone is that it's often the runt of the litter. This scone looked quite small and flat and I was very concerned about it (in other words I moaned for five full minutes to the Scone Sidekick until he asked me to stop). But it was absolutely delicious - it was fresh as a daisy and really tasty.

Hidcote reminded me a lot of Nymans - a beautiful place that somehow manages to cope with huge numbers of visitors while retaining a lovely relaxed atmosphere. I highly recommend it.

Posted by National Trust Scones at 05:12