I love the honesty of the National Trust. The fourth sentence of the Kedleston Hall guide book quotes Dr Johnson, of dictionary fame, who said; "It would do excellently for a town hall".

And I love them for quoting that so prominently, because he was right - the North Front of the house is undoubtedly imposing and striking, but it is also strangely functional: 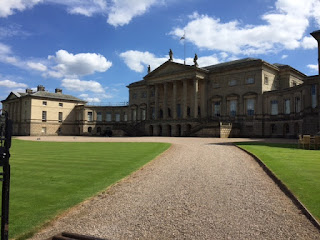 And the interiors are huge - grand rooms built for entertaining and showing off works of art, rather than providing space for a family home. 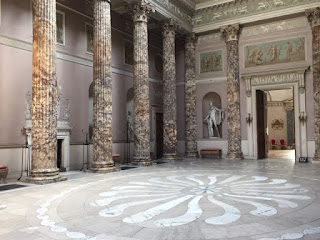 But never mind any of that, because Kedleston is a fantastic property and you need to go and see it. Here's a bit of history:

1. Kedleston has been owned by Curzons for nearly 900 years!
The Curzon family arrived in the UK with the Norman Conquest. There have been Curzons at Kedleston for hundreds of years and they still live there today - the place was given to the National Trust in 1986 but there is still a family wing.

2. The house we see today was begun in the mid 1700s!
Sir Nathaniel Curzon, 1st Lord Scarsdale, had a modest political career, like his ancestors. However as soon as he inherited Kedleston in 1758, he started to improve the place on a major scale.

3. Robert Adam was the architect!
Nathaniel had originally employed Matthew Brettingham to build his house in the Palladian style. James Paine, another Palladian architect, came along and contributed to parts of the house also. But Palladian architecture was falling out of fashion. In 1758, Sir Nat met Robert Adam, the architect known as 'Bob the Roman' because of his love of Roman buildings and the Neo-classical style. In 1760 Bob was given total responsibility for the build at Kedleston.

4. The South Front is stunning!
Robert Adam maintained much of what Brettingham had planned for the North Front, but he completely redesigned the South Front, which is indeed a much more pleasing facade I think: 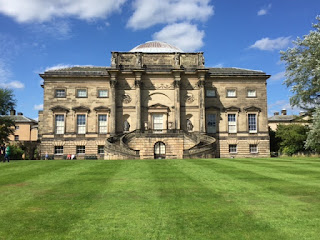 5. The interiors are also stunning!
The Marble Hall (above) is gigantic, as is the Saloon - huge rooms occasionally used for balls and other events. The showstopper room for me, however, was the Drawing Room and these huge sofas that were specially made in 1765. 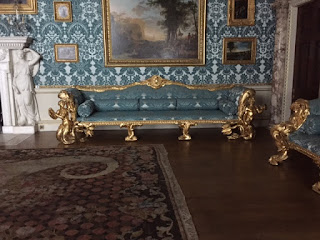 6. George - the most famous of the Curzons!
I first came across the delightful George Curzon at Montacute House last year. I told the story of his affair with the novelist Elinor Glyn - she had been helping him to restore Montacute when she opened the newspaper at breakfast one day and discovered he had just got engaged to someone else.

Well, it turns out that he was indeed quite the character. Again, the guide book doesn't flinch from giving you the full story. They quote this poem written by A FRIEND at Oxford (God knows what his enemies were writing about him):

My name is George Nathaniel Curzon
I am a most superior person
My cheek is pink, my hair is sleek
I dine at Blenheim once a week

George only inherited Kedleston nine years before his death, but he adored the place. The guide book tells how George's ambition to become Viceroy of India was fuelled by his finding out that Government House in Calcutta had been designed to look like Kedleston.

He achieved his ambition, becoming Viceroy in 1899 aged just 39. He was very driven and did a lot to preserve historic buildings, both here and in the Far East, but he made a lot of enemies. He expected to be made Prime Minister in 1923 but Stanley Baldwin got the gig instead.

George collected various pieces during his time in India and his collection was divided between a museum at Kedleston and the V&A.

My sister was with me today and I pointed out the howdah, below: 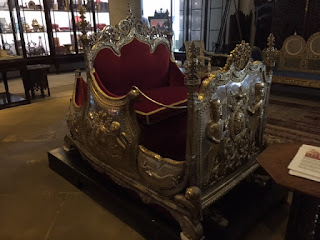 Me: Look, there's an elephant saddle
Her: What does that mean?
Me: It's a saddle. For an elephant.
Her: They put that on an elephant?! With people in it?! The poor elephant!


7. There were Kedleston scones! Thank GOD!
The restaurant at Kedleston is quite unusual - it's in the house itself, which always brings a few understandable limitations in terms of layout. At Kedleston, you queue up at a till, give your order, and then wait at your table for your scones to arrive.

There were about 14 people ahead of me in the queue and just as I got to the front I had a heart-stopping moment - a waiter that had been searching for something on the desk triumphantly found what he had been looking for, just as I was about to be served; it was a sign saying "SOLD OUT - FRUIT SCONES". But they took the order and I went back to my seat, practising my calm face for when they came to tell me they had run out.

But it didn't happen. The scones arrived and they were huge - I couldn't have picked a better-looking scone.

For some reason, however, the scone was really cold in the middle - not actually frozen, but very cold - and although it didn't really affect the overall taste, it completely confused me. I'm guessing it had been defrosted, but the rest of the scone wasn't warm so it couldn't have come directly from a microwave. ANYWAY - it was an OK scone, the tea was absolutely delicious, and the restaurant was nice and airy and light so we had a very pleasant time indeed. 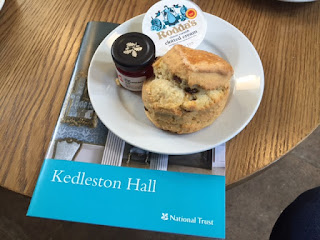 I'm going to end with a final fascinating factoid that I discovered during my extensive research* into the Curzon clan. It turns out that the singer Harry Nilsson, the man who sang 'I can't liiiiive, if living is without yoo-ooo-oooou', once owned a flat on Curzon Street in Mayfair and both Keith Moon and Mama Cass met their untimely deaths in it within four years of each other! It is not the most cheery of stories, I grant you, but interesting all the same.

It has absolutely nothing to do with Kedleston, however, as Curzon Street in Mayfair is named after a man from a different branch of the family. But factoids are factoids!

Kedleston Hall: 5 out of 5
Scone: 4 out of 5
Elephant saddle: 5 out of 5, although probably not for the poor elephant