The National Trust Scone Blog is six years old today! I can hardly believe it: 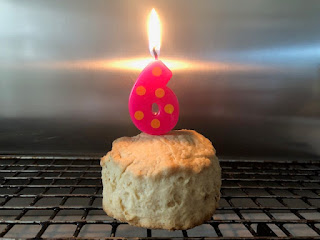 I started this project because we had joined the National Trust but failed to actually go anywhere. If I write something down I remember it, so I decided to start a blog and force myself to visit a few National Trust properties and actually learn something.

So, in time-honoured fashion, here is the National Trust Scone Blog Birthday Honours List - the 76 properties with 5-star scones, in reverse order of when I visited:
You can see all 168 scones on Pinterest.

There's also a lovely National Trust Book of Scones, which is available in NT shops or on the internet.

Huge thanks, as ever, to all of the lovely Sconepals for your ongoing support - keep sharing your National Trust scone sightings, either on Twitter or Facebook or Instagram. I love them.

I have committed to finishing this quest by December 2020 so eyes down, napkins up, and let's do this.
Posted by National Trust Scones at 03:28