The White Cliffs of Dover

Are The White Cliffs of Dover the only National Trust property to have a song named after them? A song that played on a constant loop in my head for about 9 hours today? Or did The Wurzels ever do a number called (Let's All Go To) Horsey Windpump? If not, they should. 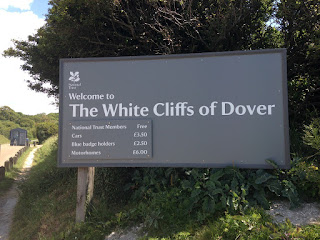 I was a bit dubious about going to visit the White Cliffs of Dover. Surely standing on a cliff doesn't give you the best view of it? I had already seen them through tear-filled eyes from the back of a P&O ferry in 1994, the year I was forced to leave the country to go and live in Germany for ten months. Anyone that knows me is now looking at their watch and saying "blimey, is that the time" because they've heard my tales of woe a thousand times, so I'll spare you.


But! The White Cliffs of Dover are part of our DNA here in the UK, along with roast dinners and the theme tunes to Only Fools & Horses, so off we went. 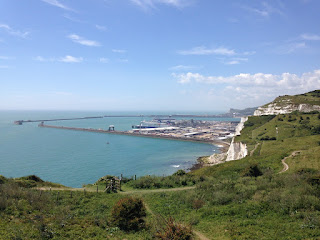 The first written record of the White Cliffs appeared in 55BC, when Julius Caesar arrived and saw hordes of angry natives standing on top of the cliffs waiting to welcome him with missiles. He carried on and landed at Deal instead.

From then, Dover and the White Cliffs have played a role in lots of our historical moments. Henry V landed at Dover after Agincourt. Charles II landed at Dover when he returned from exile during the Restoration. The Black Death was a less welcome arrival - Dover suffered badly because of all those sailors arriving carrying disease.

Dover also bore the brunt of bombardment during the Second World War - it was known as 'Hellfire Corner'. Tunnels and caves had been built into the cliffs throughout the centuries to support the defence of the realm and these were used extensively from 1939-1945 for anti-aircraft activity. 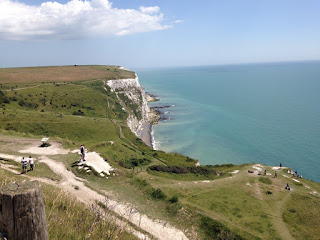 The walk from the train station to the visitor centre involves a steep climb up some steps. It's absolutely worth it though - the visitor centre itself is lovely, with a cafe offering plenty of outdoor seating so you can watch the ferries criss-crossing to and from Dover, while the enormous cargo ships manoeuvre their way east to west and back again.

I had my concerns about the scones today, because if you can't get great scones at the gateway to Great Britain then we're all in trouble. But I needn't have worried, because the scones at the White Cliffs of Dover were OUTSTANDING.

They were fresh, light, fluffy and the portion was huge. Even the Scone Sidekick agreed that they were an undisputed 5 out of 5 and he is the Craig Revel-Horwood of this scone odyssey. 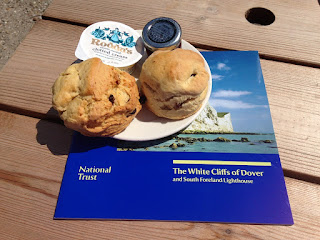 If I started the day with Vera Lynn in my head, I ended it with Lou Reed singing Perfect Day. I honestly cannot think of a nicer way to spend a sunny Saturday than walking along the White Cliffs of Dover and visiting the fantastic South Foreland Lighthouse. Highly recommended.

Posted by National Trust Scones at 21:05