There is nothing I like more than a really amazing National Trust factette. The kind of factette that just stuns you - "Blahdiblah Hall is a fine example of Palladian architecture with gardens by some of the greatest landscapers of the 18th century, and it was the birthplace of David Bowie." That kind of have-to-read-it-five-times-just-to-be-sure-you-read-it-right factette.

And so I was reading about Attingham near Shrewsbury and there it was: Thomas, 2nd Lord Berwick, was the owner of a working model of Vesuvius.

HOWEVER. What I HAVE really wanted for ages is to visit a National Trust property with an smartphone app - and Attingham has one. 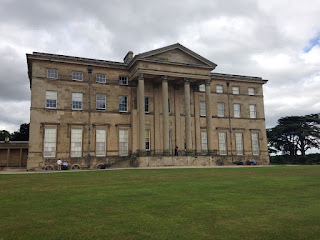 Let me quickly explain for anyone that doesn't have a smartphone; an app is a bit like a miniature website. You download it onto your phone and it displays all sorts of information on your chosen subject. I do my grocery shopping on an app. I run my bank account on an app. I time myself trying to run off all these scones on an app on the rare occasions that I drag myself out jogging...you get the idea.

Anyway, before I blab on about the app, let me tell you about the history of Attingham:

It's a huge place and the Trust is trying laudably hard to tell its story. The ground floor has been restored to its 18th century glory, although the picture gallery is being renovated so we didn't get to see that.

The first floor contains a series of relatively empty rooms that try to explain how Sophia, the courtesan, and Teresa, the war nurse, would have viewed the place and how it would have worked as a centre of education. The servants' area on the lower-ground floor is enormous.

Anyway. Today was fascinating because Attingham actually has three types of guide:

1. A man dressed up as Vesuvius-loving Thomas
We got caught up in a tour given by a man pretending to be Thomas, 2nd Lord Berwick. He was very entertaining and walked us through a few of the rooms pointing out some highlights. If we were supposed to have paid for this, I am very sorry.

2. Laminated sheets in each room
I never, ever look at the laminated information sheets at National Trust properties and I really should, because I discovered today that they're very informative.

3. The smartphone app
The app is still in its trial stages and is only available for the East Wing. You choose one of three guides (Thomas, Teresa, or an NT curator) and then you click through each room and read the information. In each room there are four or five highlights - a picture or musical instrument or music box of a monkey conducting an orchestra - and each one is explained. 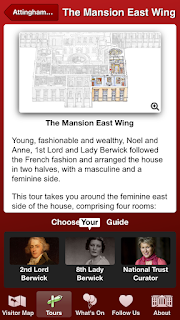 I have to say; if I was asked to design an app for a National Trust property, this is probably how I would do it. The choice of three guides is a bit tricky because you need to go back and do the same route three times to see them all, but I'm sure they'll iron that out.

HOWEVER. Neither the app, nor the human guide, nor the laminated sheets will ever beat my old favourite, the audio guide. I think I will probably have an audio guide at my funeral - I just love them. And yet very few properties do them - I remember one at Petworth, at Waddesdon, at Osterley, and a fantastic one at Lyveden New Bield. It's a shame that they're so rare as they allow you to look and listen at the same time.

The Attingham scone
Anyway, having been very honest about the app, I will now be equally as honest about the scones. Regular viewers will know the Scone Blogger's Theorem: the more popular the property, the poorer the scone. Wakehurst and Cliveden are both in the top ten most visited NT properties and yet both served sub-standard scones.

And although the scone at Attingham was alright, it didn't feel like very good value for money when compared to other properties - the cream tea today cost £4.95, which is one of the most expensive we've had, and it came with one medium-sized scone. You can see all my 70-odd National Trust scones here if you want to compare. 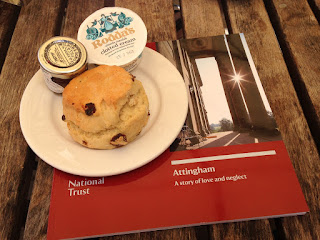 Attingham is the fourth most popular NT property, with over 370,000 visitors last year, and I expected better if I'm very honest. But it tasted OK and the tea was lovely.

Attingham: 4 out of 5
Scones: 4 out of 5
Working model of Vesuvius: 0 out of 5 - it must have been sold during bankruptcy
Posted by National Trust Scones at 12:36