If I had to pick a job from history that I would have hated, 'coroner for plague victims' would be quite high, as would anything to do with sewage.

But I would also put 'Victorian plant hunter' on that list. Weeks of being thrown about on a rickety boat to some godforsaken place; potentially being eaten by something (or someone) while you thrashed about in the undergrowth searching for specimens; lovingly drawing your findings; carefully storing them for the voyage home; losing the lot when your ship got stuck in Godwin Sands half a mile off Dover; turning up weighing 5 stone at your patron's house clutching a single dead plant that they take one look at and say "the Duchess of Porkington's man found that two months ago" before slamming the door in your face? I'd have taken my chances up a chimney, frankly.

Luckily the Victorians were a bit braver than me. Biddulph Grange Garden near Stoke-on-Trent was the creation of one James Bateman, a horticulturalist and landowner. Starting in 1842, James and his wife Maria spent twenty years creating a 'world garden' from scratch, planting specimens from the four corners of the globe. 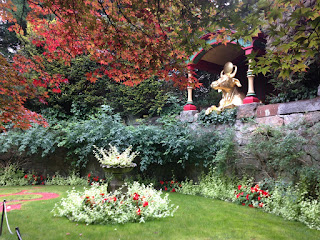 The Bateman family eventually had to sell up, but the National Trust acquired Biddulph in 1988 and have restored it to its former glory. You need a good 2-3 hours to walk around it and see exactly what a Victorian world garden would have looked like. Some of my highlights:

China
Most pictures of Biddulph Grange Garden focus on the 'China' area, and for good reason. It's stunningly pretty, laid out to resemble a real-life willow pattern scene. There's also a gilded water buffalo (see picture above) and a giant frog sitting on a wall. 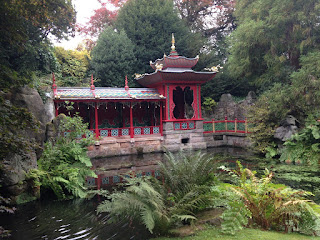 The plants in the China area were brought back by the plant hunter Robert Fortune. They include one of the oldest golden larches in the UK, along with Japanese maples and cedars. 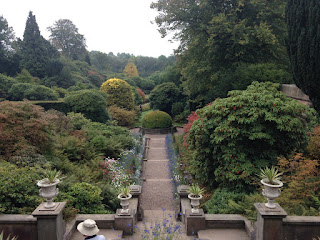 Egypt
I'm not a massive fan of topiary, but I thought the Egypt area at Biddulph was very effective, with its pyramid and stone sphinxes. Unfortunately you'll have to imagine the pyramid clipped out of yews as I clipped it out of this photograph for some reason. 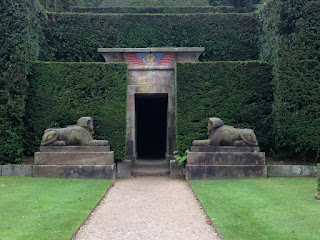 The Dahlia Walk
I unexpectedly discovered a massive respect for dahlias today. It's October but there they were, blooming bravely away even as the temperatures dropped. Yay dahlias. 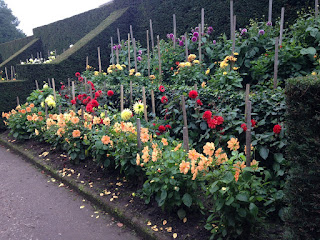 The singing tree
I was aware of someone singing at Biddulph almost as soon as I set off around the path. I eventually found the source of that singing: it was a tree. I read later on the website that it's a sound installation as part of a 'Dangerous Discoveries' art project. I completely missed this project, which made me a bit sad. On the other hand, I've spent several hours thinking that I'd seen a singing tree, so it's not all bad.

The Biddulph scones
I'm not sure scones were a feature of the traditional Victorian world garden, more's the pity. However, Biddulph was the 97th stop on the National Trust scone odyssey AND my first scone mission in four weeks, so I desperately wanted it to be a good one.

And I was in luck. The Biddulph scone was FANTASTIC. I would actually go so far as to rank it in the top three National Trust scones of all time - it was fresh, it was crisp on the outside, soft and fluffy on the inside. I loved it. 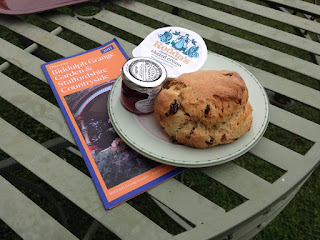 I also visited nearby Little Moreton Hall today. For some reason, I decided to buy the LMH guidebook in advance and read it before I went - this caused me all sorts of problems with my self-esteem, as you can read in that post - but it made a big difference to my visit. If I had read the Biddulph guidebook in advance, my trip would have been a lot better. I missed seeing 'The Ape of Thoth' for example - I'm not sure what that is, but it sounds brilliant. So guidebooks in advance in future.

Biddulph Grange Garden: 5 out of 5
Scones: 5 out of 5
Singing tree reminiscent of The Singing Bush from The Three Amigos: 5 out of 5
Posted by National Trust Scones at 01:27