I have a tricky relationship with TripAdvisor. It sometimes makes me laugh - I recently read a comment from someone asking if there would be any fog at an NT property.

It also routinely makes me despair. I absolutely loved Beatrix Potter's former home at Hill Top in the Lake District and yet someone had spent valuable minutes of their life rating it Terrible and offering to bulldoze it. I am not of the same species as that person.

However - and I NEVER thought I would say this - if you want to learn about Allan Bank in Grasmere, you should definitely read the TripAdvisor reviews. 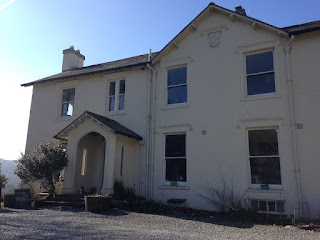 They really give a very accurate representation of the house and how it works. Bizarrely, the Allan Bank page on the NT website doesn't tell you much about the place at all, considering its history.

But I did a bit of extra reading and here's what I managed to find out:

But the history of Allan Bank didn't end there. It later became the home of Canon Hardwicke Rawnsley, the man who founded the National Trust, when he retired in 1917.

He left it to the Trust and it was tenanted for many years. In 2011, it was gutted by fire - once it was restored, the Trust took the opportunity to open it to the public.

But what makes the house at Allan Bank very unusual is that it isn't 'finished'. It's undecorated and full of bits of furniture that you can sit on.

And that's what the TripAdvisor reviewers seem to love - the informality of the whole place, where you can pour yourself a cup of tea in the kitchen and take it into another room to sit and marvel at the views.

In fact, it's probably just as well that I live 300 miles away from Allan Bank, because if I lived nearby I'd be in there every single day - a book and a flask of tea and I'd be happy as Larry plonked in one of these armchairs: 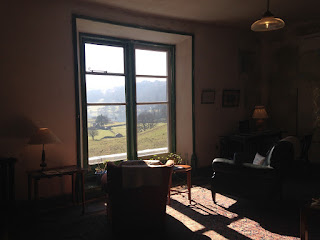 There's a kitchen cafe where you can make yourself a cup of tea and buy a piece of cake. There were no scones but I didn't mind about that - how can you complain when you're drinking your tea with this view: 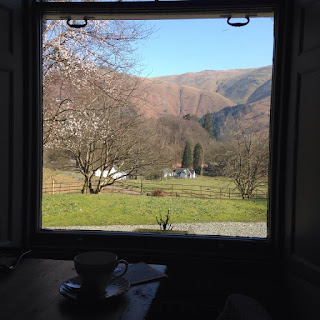 In fact, it's the views that make Allan Bank really special. I was very lucky with the weather: 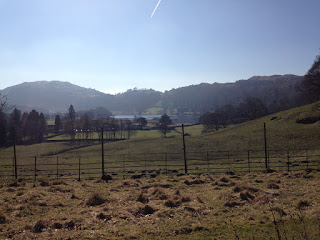 Grasmere was described by Wordsworth as "the loveliest spot that man hath ever found" and I'd go along with that. An absolute must see.

Allan Bank and Grasmere: 5 out of 5
Scones: there weren't any but there was cake and views