I loved reading when I was little. But for some reason my local library only had one Beatrix Potter book and that was The Tale of Ginger and Pickles. It's about a cat and a dog who run a shop but keep giving credit to their customers, so they go out of business. I'm sure it was a big favourite in George Osborne's house, but even at the age of five I knew capitalist propaganda when I saw it and I didn't like it.

Maybe this is why I've never really had any major affection for Beatrix Potter. And when I discovered that her former home at Hill Top has no tea room or scones, I very nearly gave it a miss. 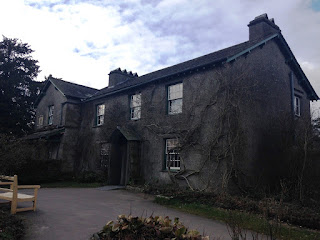 But thank God I didn't give it a miss, because it's now one of my favourite National Trust properties and I urge you all to go.

It's a relatively small and very understated place - it's a farmhouse, basically - but the minute I walked into it, I completely understood why she loved it so much. It has a really warm and cosy feel to it and it contains a whole treasure trove of objects that meant a lot to her.

I'm ashamed to say that I had always assumed that Beatrix Potter was a little bit twee. In fact, she was way ahead of her time:
The ONLY bad thing about Hill Top is that they don't allow you to take photos inside. I was very sad about that, because the Entrance Hall is particularly lovely and her library was stunning, with four giant landscape paintings done by her brother, Bertram. Mind you, I am supremely bad at taking pictures so you're probably better off just going to see it all for yourself.

Lastly, I was delighted to meet a cat at Hill Top. Sadly, he wasn't wearing a jacket and he didn't appear to be running a shop. And he pointedly refused to pose for me. 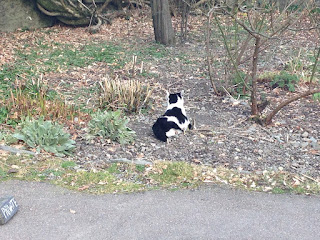 But never mind! Hill Top is absolutely marvellous and I highly, highly recommend it.

Hill Top: 5 out of 5
Scones: there weren't any, but I knew that
Cat not really playing ball with the whole Beatrix Potter thing: 0 out of 5

Posted by National Trust Scones at 12:30