The first time I saw Boscastle in Cornwall it was being washed into the sea. I hasten to add that I wasn't actually there - I was 200 miles away watching on TV as cars and buildings were carried off after a catastrophic amount of rain fell on 16 August 2004. It's an absolute miracle that nobody died. 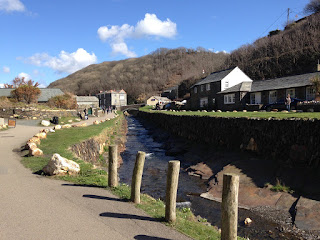 Boscastle could easily be called National Trustville. The NT owns over 300 acres of land, including the harbour, the river, roads, bridge, and several buildings.

Here are some factoids about Boscastle:

A strange haze was hanging over Boscastle when we arrived. "It's like that film," said the Scone Sidekick. "Poldark?" I replied. "No, The Wicker Man." I knew exactly what he meant, though. And the eeriness continued when we found the Museum of Witchcraft - this isn't owned by the NT, however.

Like me, you have probably often thought that it would be AMAZING if there was a National Trust Scone Hotel, or Hotel Sconeifornia as I had already named it. Guests could learn to bake NT scones if they wanted, or they could just eat them. Anyway, today I discovered that it ALREADY EXISTS!!! I know! The Trust owns some holiday apartments in Boscastle and they're located in the SAME BUILDING as the visitor centre/shop/cafe! You couldn't get any closer.

And it got even better. On arrival I found a note saying "enjoy a complimentary cream team in our cafe." So off we went.

The NT cafe itself is lovely. It's cosy and comfortable with very friendly staff. The Scone Sidekick spotted the paper plate/cup and wooden knife and his face darkened - he recently had a rare "this is like McDonald's" meltdown in Greenway when presented with similar - but he loves Boscastle so he managed to stay calm.

If there was an award for NT scone that did not look very promising but turned out to be first rate then the Boscastle scone would win it. I hacked into it with my little wooden knife and my heart sank - it looked more like a bread roll. But I ploughed on and was delighted to discover that it was absolutely delicious. It was light as a feather and very tasty. 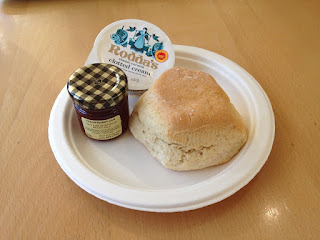 If every NT holiday home is as good as The Gaffer in Boscastle, then I can throw my passport into the bin and spend every future holiday touring the UK. I highly recommend it - book today (and I'm not being paid to say that).