I was watching Countryfile just before Easter when I noticed a tweet: "Has anyone else working at the National Trust just seen this week's weather forecast and had to take a big gulp of wine?"

Today at Trelissick in Cornwall I realised that all NT employees probably have one eye on the weather at all times, but the ones that really lie awake at night worrying are the ones that are responsible for a newly acquired property. 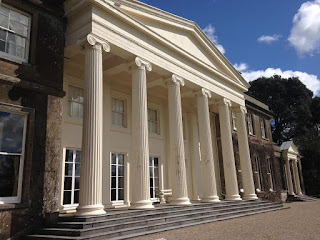 Properties that have been owned by the NT for years have already been through the worst of the weather - the storms of 1987, torrential downpours, massive snowfall etc. And although I'm sure they all have their ongoing problems, the NT knows them well and is able to prevent things from falling apart.

But a new property like Trelissick House brings all sorts of unknown dangers. All the due diligence in the world can't prepare you for Storm Katie and half the roof blowing off.

In fact, Trelissick has only had a few issues so far: some chunks fell off the portico, so they're hastily raising funds for that. And the solarium was shut due to some panes of glass being blown in, so they're trying to fix that as well. However, it must be like that Whack-a-Mole game, where every time you smack a problem down with your hammer, another one pops up.

Anyway. Here are some facts about Trelissick:
I really liked the house - it's a bit shabby in places and so you get a real sense of what it must have been like to live there.

The main attraction, however, is the view from the house. It's absolutely stunning:


The Trelissick scone
And I'll tell you what else was stunning: the scones. Trelissick was the 120th stop on the National Trust Scone Odyssey, and we've seen a lot of cafes and eaten a lot of scones. But the cafe and scone at Trelissick were right up there with the very best - it was a lovely place, and the scone was fresh and light and really tasty. 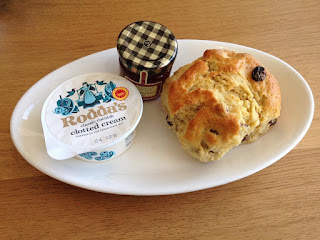 The Scone Sidekick was also very taken with the retractable awning that Trelissick has installed over its outdoor seating area. I think he's now waiting for Storm Keith, or whatever it'll be called, to come and knock down our non-retractable one at home so he has an excuse to copy it.

It didn't stop there - read about Trengwainton and yet another five-star Cornish scone.
Posted by National Trust Scones at 13:45