I am all too aware that this blog is a bit biased towards National Trust houses. That's where the scones tend to hang out. But the Trust also owns woodland, coast, heath, farmland...hundreds of thousands of acres of beautiful land that would be ruined if the NT started building cafes on top of them.

So I decided to stop off at Chapel Porth today, during the Scone Blogger's Spring Tour 2016 (Part 2), even though I was doubtful of any scone opportunities. And I'm very glad we did, because we got to wander around a beautiful rocky little cove. It was only when I got back that I realised we'd visited during high tide - at low tide it's a big sandy beach.

Chapel Porth is near to St Agnes, which was a mining community for 400 years until the 1920s. There were 100 tin and copper mines in the area. 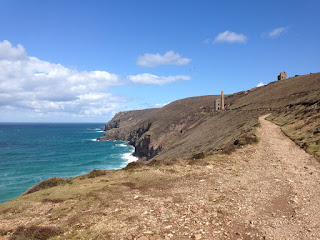 One of those mines was called Wheal Coates, which opened in 1802 and had three engine houses by the time it closed in 1889. The Towanroath Pumping Engine House was built in 1872 and it's still there today - it's a very pleasant half mile walk from the beach. 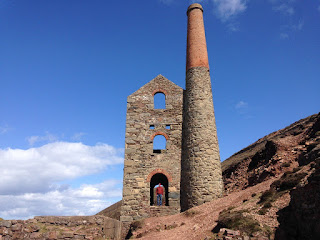 I didn't think I could love the National Trust any more than I do, but today I discovered that they organise the World Bellyboard Championships that are held at Chapel Porth. 2016 is a fallow year, according to the brilliant website, to "allow the waves to replenish". And as if that isn't excellent enough, they have a 'cake-off' as part of the event.

Speaking of cake, there's a little tea kiosk selling sandwiches at Chapel Porth but I couldn't see any scones and I didn't ask if they had any - Richard Nixon would have slept a lot easier at night if I had been the investigative journalist working on Watergate, I tell you. But scones or not, Chapel Porth is beautiful and well worth a visit.