I don't know about you, but I have a mortal dread of mispronouncing place names when I am actually in that place talking to a local.

It's not so bad if you get it wrong in front of your own friends. You might say; "I'm going to Yosamight National Park next year." And if your friend is a true friend they will either say "Wow! That's great. I thought they pronounced it Yo-sem-it-ee though? I might have got that wrong," or "Wow! DAVE! Guess where Sarah is going next year? YO-SEM-IT-EE!"


But it's really not OK to get it wrong in front of a local. I have laughed at too many Americans asking for directions to "Lo-og-borrow" (that's Loughborough to you and me).

And so I was deeply troubled by this, the most useless piece of information ever posted on Wikipedia:

Thanks for that, Wikipedia. I'm glad to know Trerice is pronounced Tre-rice and not, you know, Lu-ton.

So I had to rely on the usual fall-back plan of getting the local to say the word Trerice first. Luckily the woman at the reception desk obliged. I think it's called Truh-RICE as in rice pudding. Or maybe she too had looked it up on Wikipedia and didn't know either. 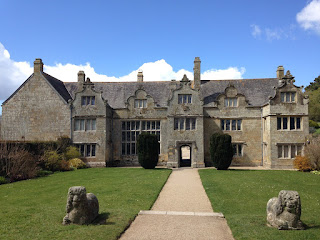 Anyway. Trerice is an Elizabethan manor house in a very peaceful spot close to the not-very-peaceful tourist magnet of Newquay in Cornwall. Some background:
This is the Great Hall, as seen from the Minstrels' Gallery: 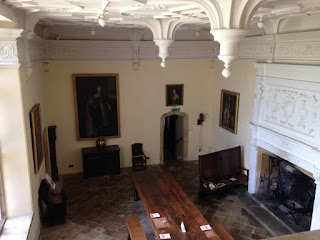 The Trerice scone
But what about the all-important scones? We'd already had a fantastic scone in a fantastic NT cafe at Trelissick before we got to Trerice. The Scone Blogger prophecy foretells that thou never geteth two excellent scones in a row, so my expectations were not high.

But Trerice delivered: the cafe was lovely and the scone was absolutely delicious. It was a unanimous five out of five from me and the Scone Sidekick. It also marked a hat-trick of scones for Cornwall, what with Lanhydrock also scoring 5 out of 5 back in October. 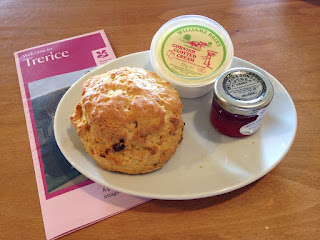 I spent many a weekend partying in Newquay when I was 18 and so we drove there very quickly to see how it looked today. I was genuinely expecting to feel pangs of sadness for my youthful days, but while I remember them very fondly, I wouldn't go back there for all the clotted cream in Cornwall. Give me the tranquility and the scones of Trerice any day.

Trerice: 4 out of 5
Scones: 5 out of 5
Inhabitants' success at outwitting prophecies: 0 out of 5

Read about another perfect scone 17 miles away on our visit to Trelissick.

Posted by National Trust Scones at 14:30