Here are two superb facts about the Blickling Estate in Norfolk:
I would struggle to come up with two greater claims to fame, frankly. 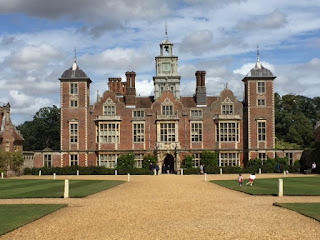 In fact, Blickling has had MANY claims to fame:


Harold Godwinson (or Harold II as he was for a few months in 1066)
There was a manor house at Blickling in the 11th century which belonged to Harold Godwinson. He later achieved fame as Harold II, the last Anglo-Saxon king of England, who succeeded Edward the Confessor and reigned for a few months before meeting a messy end near Hastings. William the Conquerer gave Blickling to his chaplain.

Sir John Falstolfe
Sir John owned Blickling at the beginning of the 15th century - he was an English knight who lived from 1380-1459. However, he was actually made famous in the 16th century as Falstaff, the fat and cowardly knight that appears in three Shakespeare plays. Whether the real John was fat and cowardly, nobody knows. But he definitely lived at Blickling.

Sir Thomas Boleyn
Sir John sold Blickling to Geoffrey Boleyn in 1437. His grandson, Thomas Boleyn, inherited in 1505. Nobody knows when his daughter, Anne, was born, so it's impossible to know whether she was born at Blickling or Hever Castle. However there's a carving on the wall saying "Anna Boleyn - Hic Nata" or 'born here' and who are we to argue. 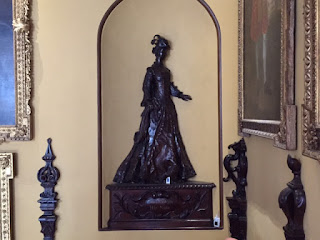 Anne is said to haunt Blickling on the anniversary of her death. Thomas is also said to haunt the area, cursed for eternity for failing to prevent Henry VIII from executing two of his children. Every year, he has to cross 12 local bridges before cockcrow.

Sir Henry Hobart (pronounced Hubbard) bought the Blickling Estate in 1616 and built the house that we see today. However, instead of razing the previous house to the ground and starting from scratch, he asked Robert Lyminge, the architect, to incorporate the old house into the new. Which he did.

Sir Henry Hobart 4th Baronet
Poor old Henry Hubbard - I'm only including him on this list because he died following a duel. He lost his seat during an election in 1698 and blamed a neighbour for badmouthing him. He challenged the neighbour to a duel, which took place illegally without seconds or witnesses, and his neighbour "ran him through". Henry was carried home, where he died.

Henrietta Howard
Henrietta was the daughter of the Henry that was killed in a duel. She never actually owned Blickling - it belonged to her brother and then to her nephew. However, she did an awful lot for her brother - he benefitted greatly from the fact that she was mistress of the Prince of Wales from 1718 to 1734 (or George II as he was from 1727). Before that it seems she had had a tough old time - she was married to Charles Howard, son of the Duke of Suffolk, who turned out to be a wife-beater and a gambler so she left him in 1717, which meant giving up all contact with her son.

Philip Kerr, 11th Marquess of Lothian
Henrietta's nephew, John Hobart, left the house to his second daughter, Caroline, in 1793. His eldest daughter, Harriet, had annoyed him by getting divorced. However, Caroline had no children and so it was Harriet's son by her second husband, the Marquess of Lothian, who inherited Blickling in 1850.

By 1930, Blickling had made its way down the line to the 11th Marquess of Lothian, Philip Kerr. He was British ambassador to the USA from 1939-1940, playing a major role in getting the US into World War II. He was also a huge supporter of the National Trust, helping to set up the Country Houses Scheme. He did a lot to the house and garden at Blickling, which had been tenanted for many years, and it was passed to the Trust after his death in 1940.

What did I tell you? So much excitement for one house.

But this brings me on to something that always flummoxes me about the National Trust; why do volunteers dress up in period costume at NT properties, but dress up AS SERVANTS. Why? It's not actually 1730, so why not pretend to be Henrietta Howard? Why be a lowly kitchen maid when you could be marching about the place hitting other volunteers with a riding crop for being lazy?

But the volunteers pretending to be cooks at Blickling were great - they were very funny and they engaged brilliantly with the visitors, especially the teenagers; "How old are you? 14? Great, you can start tomorrow" (cue terrified face from teen). 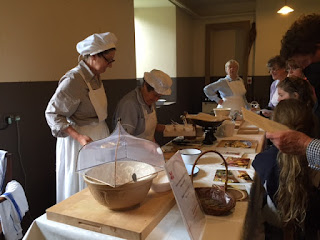 But more importantly, they were selling recipe cards and one of them was for apple scones, which is of course a surefire way to impress me: 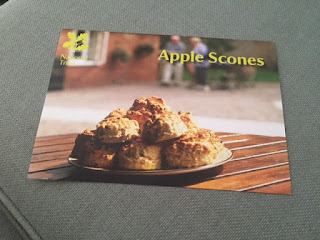 The Blickling scone
Speaking of scones, the Blickling tea room was very pleasant and the scone was very, very tasty indeed - one of the tastiest scones I have ever encountered on this Odyssey. I agonised over the score though, because although it was tasty it was a tiny bit dry. In the end, I gave it a 4.9, which is mean considering they also offered recipes for apple scones and all, but this is a very serious study and I have to be ruthless. 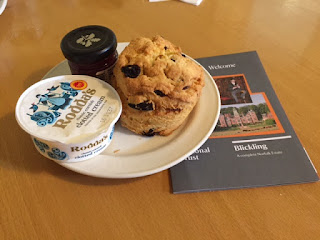 A couple of tips for visiting Blickling:
1. Consult the map. I hate to admit this to you, but I couldn't find the garden. It's enormous but I just could not work out how to get into it. If I had looked at the map, I'd have worked it out.
2. If you need somewhere to stay near Blickling, try The Buckingham Arms - it's a pub located on the estate (not NT), it has rooms, and it looked lovely.

Posted by National Trust Scones at 23:15

Email ThisBlogThis!Share to TwitterShare to FacebookShare to Pinterest
Labels: Norfolk