For at least 18 months after I started this blog I had a very elaborate scenario planned out in my head. I would befriend someone at the National Trust and one day they would meet me somewhere - maybe in a lay-by outside Swindon, or by the Capri Suns in Poundland - and hand me a brown envelope containing a list of every single National Trust property and how many visitors each property got last year. I could think of NOTHING I wanted more, if only I could get my hands on this highly sensitive and potentially devastating document.

And then about two years into the project, I discovered that this list is freely available in the National Trust annual report. So if you ever want to lose two hours of your life going all John McEnroe and yelling "That CANNOT be the third most popular NT place in Britain!", you can download the list of visitor numbers from here.

But there was one name on the list that I didn't recognise at all, and it was in the Top Ten: Larrybane. After a couple of years the Trust started listing it as Carrick-a-Rede. And suddenly it all became clear: Carrick-a-Rede is the rope bridge that's 8 miles down the Antrim coast road from the Giant's Causeway. So while 700,000 people last year visited the GC and made it the NT's most popular property, a whopping 435,000 of them also popped along for a nerve-shredding wander across some wooden slats hanging 30 metres over the waves and rocks below. 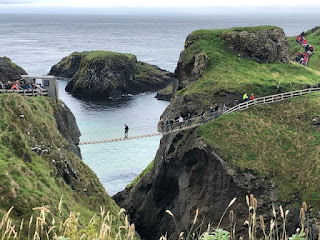 Would those people have gone to Carrick-a-Rede if it wasn't near The Big GC? It's not really for me to say, and anyway it's immaterial because it IS near The Big GC and those people DID go there, making it the 6th most visited property last year, one above Waddesdon Manor.

There were two surprises waiting for me at Carrick-a-Rede. One was a tea room. I first went to Carrick-a-Rede about 12 years ago and I'm certain that there was NOTHING there, except the bridge swaying mockingly in the wind and a cow in a field that the Scone Sidekick stared at for about 20 minutes. (I just checked and I still have the 8 billion photos he took of it on my computer - it was a "nice" cow apparently.)

This meant that I hadn't actually included Carrick-a-Rede on my list of places to visit for the Grand 2019 Tour of National Trust Scones of Ulster. It was total luck that I happened to see someone else on Twitter enjoying the cafeteria and I was able to make a last minute addition to the itinerary.

The second thing was surprised me was the guide book. I had been to a couple of places recently that didn't have their own guide book, which always makes me a) a bit sad that nobody cares enough to write one and b) very worried, because what am I going to talk about? I really didn't expect to find one at Carrick-a-Rede (see above for rope bridge + cow = not much to write about, even if the cow is exceptional).

But there was a guide book - 32 pages no less - and it was brilliant. Here are a few things I learned: 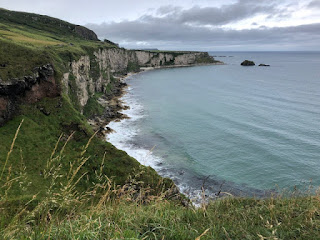 It's fascinating to think of the vast history of the area and the use of its resources over time. Almost as fascinating as watching people stride out confidently and then lose their nerve completely when they step onto the bridge. Needless to say I didn't go anywhere near actually standing on it. The Carrick-a-Rede scone
But on to the scone. This was my 7th scone in three days and so all scientific consistency fell down between the ropes; there was a choice of fruit or raspberry and white chocolate and I opted for the latter. I asked for some cream with it but the lad serving said they didn't have any. 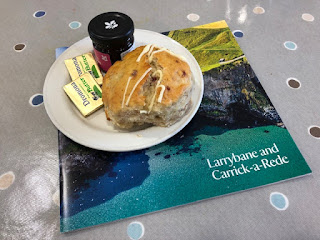 I was half way through the scone when he suddenly appeared with a little pot of whipped cream, and very glad I was to see it. The scone was unfortunately dry - I don't think it was fresh, but I've been wrong about that before - and the cream helped to alleviate things.

But it was great to have a cup of tea and a scone back at a place that holds so many special memories.

Carrick-a-Rede/Larrybane: 5 out of 5
Scone: 4 out of 5
Cleverness of the Atlantic salmon (until they were practically fished out of existence): 5 out of 5