There are no scones at White Park Bay in County Antrim. In fact, during my 45 minutes there, I saw nothing apart from the beach, the sea, and the waves.

I was beyond delighted with myself that I'd shown a bit of spontaneity on the Grand Scone Tour of Northern Ireland 2019, pulled in to the car park on my way to Carrick-a-Rede, and been rewarded with such a beautiful and peaceful spot.

And then I mentioned on Twitter that I had been there, only for someone to ask "did you see the cows?" and I laughed, thinking he meant that Antrim was just generally a very cow-laden place, but then I checked the NT website and saw this: 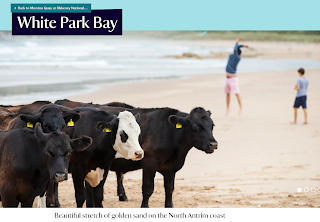 I was very, very sad to have missed the beach lovin' cows but to be honest I'd probably have run a mile if I had seen them.

Instead I was just treated to beautiful views on a Wednesday morning: 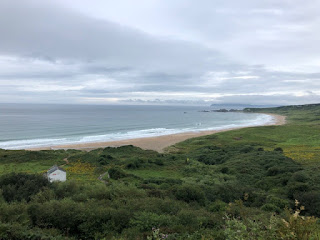 It wasn't cold but the sea had that slightly wintery vibe going on, where it didn't really feel like August anymore: 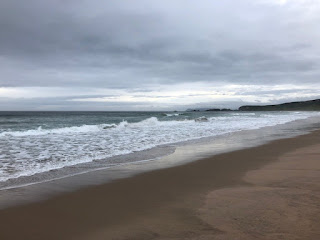 It's an ancient area, like so much of the Causeway Coast - full of fossils and history. There was a sign saying that the remains of an old hedge school could be found nearby, so I took loads of picture of the white building below only to find out later that this was actually the old youth hostel. I never did find the hedge school (a hedge school was an illegal school set up in Ireland in the 18th and 19th century to teach Catholic and Presbyterian children - only Anglican children were allowed to be educated back then). 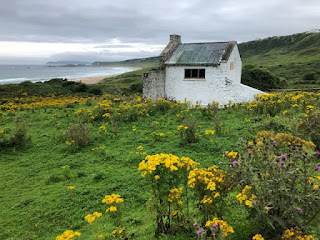 Some National Trust properties are just beautiful beyond words, even without scones. Like Chapel Porth in Cornwall, I am adding White Park Bay to that list and encourage you to go there as soon as you can.

Other stops on my tour of Northern Ireland: Crom, Castle Coole, Florence Court, Springhill, Cushendun, Divis and the Black Mountain, The Argory.

Posted by National Trust Scones at 06:20