I absolutely love watching National Trust room guides interact with the British public. At one extreme you have the room guide that sits in a dark corner and doesn't say a word, and none of the visitors ask them anything, because we're British. Occasionally a German visitor will walk in and say "What is this?" and the room guide jumps a mile.

At the other extreme is the room guide that talks without drawing a breath - I hasten to add that I now know EXACTLY why they do this: they have a mortal dread of the Expert Visitor. We've all seen them - the architectural expert or professional historian that knows more than the guide and spends the whole time tutting and saying "well, that's not EXACTLY right - the horse that threw him in 1532 was actually called Archibald, because his other horse, Geoffrey, was lame that day" until everybody just wants to shove Expert Visitor out of a top floor window.

But the best room guides are the ones that don't wait to be asked questions and don't fear the know-it-all visitor - they just go for it. And that's exactly what the room guides at Melford Hall did today. They were ALL brilliant - really enthusiastic and happy to show off the property. I wanted to take a quick picture of the library door and the guide walked the full length of the room to shut it for me, so it looked its best - I know this doesn't sound like much, but it really helps to make you feel welcome. 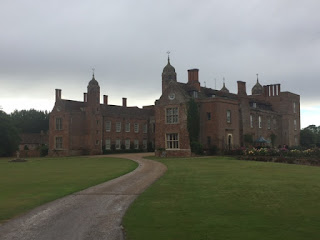 But let me tell you a bit about Melford Hall itself:

1. The Hyde Parkers still live there!

2. Beatrix Potter was a regular visitor!

3. The Cordells built the place!
4. The Savages inherited in 1602, then it went back to the Cordells!
The Melford scone
But let's move on to the all-important scone. I think I've been letting the Scone Sidekick watch too much reality TV; today when I asked him for his scone verdict he looked very serious but then said "the best scone I've had in a long time" in the same tone of voice I would expect him to use when sending somebody to the gallows.

But he was right - it was a fantastic scone. Fresh as a daisy, superb texture, and great taste. Great job, Melford. 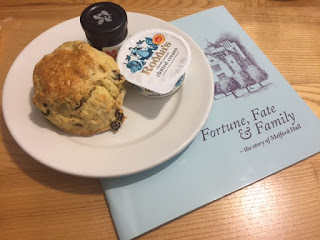 I'll end with this, the winner of Creepiest Thing I Have Ever Seen at the NT. I'm still not sure exactly what it is or what it's for, but it was acquired by Sir Harry Parker's dad after he captured a Spanish galleon full of gold and porcelain in 1762. This was one of the things he was allowed to keep. I'd have been locking my bedroom door at night, personally.

Suffolk has been a very happy hunting ground for the Scone Blogger. Other properties include: Dunwich Heath, Flatford, Ickworth, Sutton Hoo
Posted by National Trust Scones at 02:25