However if the National Trust was to open my house to the public, they'd find that around 10,000 of those objects were little plastic bags containing a spare button that come attached to new clothes, and another 10,000 were hair bands that seem to be everywhere when I'm hoovering, but evaporate into thin air whenever I actually need a hair band.

The collection at Snowshill Manor doesn't include any such trivialities. I would say that, of all the NT properties I have been to, Snowshill is the hardest to put into words. But I will try. 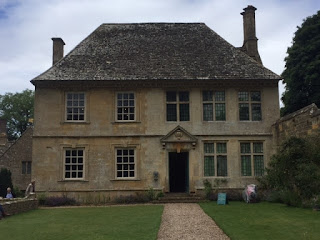 Who was Charles Wade?

At first, Charles reminded me of Catweazle - a wizard from a bygone era who somehow ended up in the 20th century. His eccentric hair and dress sense certainly set him apart from the crowd - apparently when he left the solicitor's office after buying Snowshill for £3,500, someone handed him the money for a cup of tea thinking he had fallen on hard times:

But then I decided he was actually Private Godfrey from Dad's Army; during the Second World War, Charles joined the Home Guard. He was much slower at marching than the others, but they charitably put that down to him having been in the Royal Engineers, who apparently marched at a slower pace. He also once asked to fire the platoon's Lewis gun but he fell over while he was trying to lie down to get in a shooting position and the gun went off into the sky. He resigned soon after.

My other favourite story was how he recruited his gardener: "to maintain his own authority and ownership he instead chose a hardworking man from among the builders, William Hodge, whose name and mauve hat were also to his liking."

What is there to see in the Manor?
I expected Snowshill Manor to be like an antiques shop - just loads of stuff thrown about. But it absolutely is not like that.

The first two rooms are quite misleading, in that they seem quite ordinary and sedate. But as you push on through the house, you find the most bizarre things, from a tableau of scary-looking samurai warriors to a room that is chock-full of bikes:


Where did Charles live?
Charles didn't live in the Manor - that was for his collections. He lived in the Priest's House opposite. Sometimes at the NT you see one room that sums up the person completely - maybe Rudyard Kipling's study at Bateman's or Vita Sackville West's study at Sissinghurst - and Chas's bedroom does exactly that. He definitely wasn't your typical 1920s landowner:


What was my favourite item in the Manor?
I read a pretty scathing TripAdvisor review before we went to Snowshill that said "it's just a load of tat". I quite like tat so I wasn't worried. But I warned the Scone Sidekick and said "if it's a bit boring, let's just pick our favourite thing?" I promptly forgot about this until he reminded me. I decided to go with these masks: 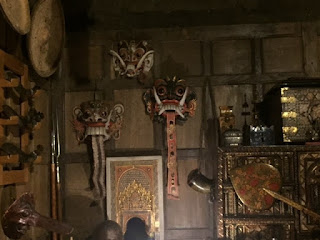 What was the Scone Sidekick's favourite item in the Manor?
It's funny the things that you discover about your loved ones. Today I found out that my partner of over ten years has a thing for sedan chairs. It's not a deal-breaker or anything, but it was a bit surprising. 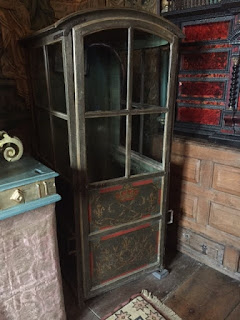 Also - the person that wrote "it's just a load of tat" on TripAdvisor needs their head examined.

The Snowshill scone
But let's move on to the all-important scone. I had foolishly expected Snowshill to be quite quiet on a Thursday but it was absolutely heaving - a coach party pulled up just as we were arriving, forcing me and the Scone Sidekick to make like those racewalking athletes in the Olympics and waddle our way at speed down to the tea room.

The scone itself was tasty - maybe a little dry, but I ate it all and I enjoyed it. 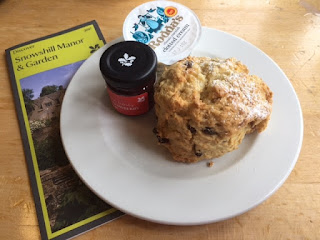 Snowshill Manor: 5 out of 5
Scone: 4.5 out of 5
Charles Wade's gardener recruitment criteria: 5 out of 5
Posted by National Trust Scones at 13:50