It has been FOUR YEARS since I started this blog. Four years since I woke up one morning and thought "I need to get my act together with this National Trust membership. I joined six months ago and I haven't even managed to visit the huge stately home situated 1.5 miles from my living room. And when I do visit, I'm not learning much because I walk around thinking about cake and not really looking at anything."

In a flash, it came to me - I always remember stuff when I write it down so I'll start a blog. And lo! The National Trust Scone Blog was born. 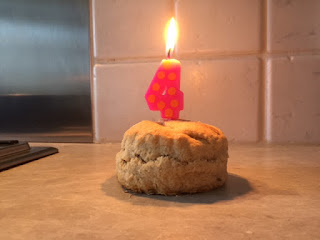 In the past four years the Scone Sidekick and I have:
Scone Boffin Corner: Interestingly, our hit rate has gone up in the last 12 months. We've visited 23 properties and 11 of them served 5-star scones. Even with my worse-than-Diane-Abbott-maths, I can tell that's pretty good, and with my trusty calculator I can tell you it's actually a 48% hit rate against a lifetime 37%! Fascinating.


And so here is the National Trust Scone Blog Birthday Honours List - the 58 properties with 5-star scones, in reverse order of when I visited:
You can see all 137 scones on Pinterest. This year also saw the publication of the National Trust Book of Scones, which you can buy in NT shops or on the internet.