I met my match at Mount Stewart in County Down. I don't mean that I found a giant scone that I couldn't eat, or that I was confronted by a posse of angry catering staff wanting vengeance for all the 0/5 marks that I've given out over the years.

I'm talking about my reading. I love it when I find a really good book about an NT property and I was over the moon to find one about Robert Stewart, aka Castlereagh, in the shop at Mount Stewart - I knew he was an interesting character. But in my excitement I failed to notice quite how weighty it was.

Here it is, with the NT handbook (and my cat's tail) for perspective: 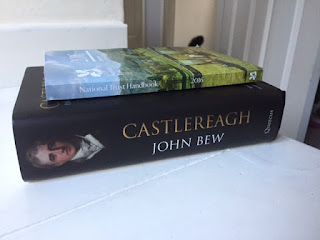 Let's face it, scone fans; I was never going to read all of that on an Easyjet flight from Belfast to Luton. But let me share what I've learned so far: 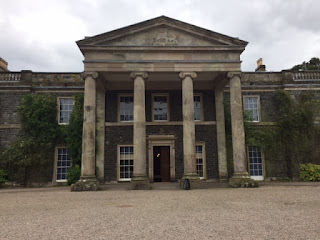 2. Mount Stewart - the house
We got there early so we joined the guided tour, which was really good. A restoration project has been going on for five years and the guide pointed some highlights:

In the Central Hall, black and white linoleum tiles that had been put down in the 1960s were removed to reveal the original 1840s floor: 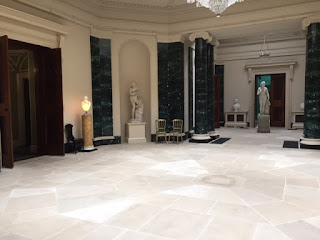 On the stairs is a picture of Hambletonian, a racehorse owned by the grandfather of the fifth Marquess of Londonderry. Hambletonian took part in a two horse 'race off' in 1799 and won - this portrait shows him being rubbed down afterwards.

George Stubbs, the painter, was apparently unimpressed by how badly the horse had been treated during the race and as a result the picture has some imperfections; the horse is standing on its two left legs, for example, and the stable lad would have to have been Mr Tickle to have an arm long enough to reach the horse's back like that: 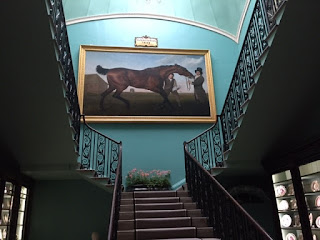 Below is the study of the seventh Marquess, who was Minister for Education in the Northern Ireland government from 1921. The guide told us how his plan for education laid out two requisites for the education of children: Catholics and Protestants should be educated together, and religion should not be included on the curriculum. His ideas were not popular and children still attend church-run schools today. 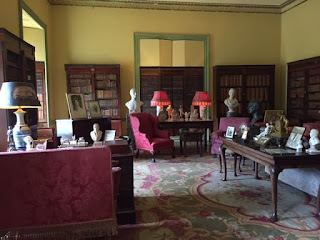 3. Castlereagh - great statesman or despicable murderer?
But let's move on to the most famous owner of Mount Stewart. There's a poem by Shelley, written in 1819 after the Peterloo massacre, and our friend Castlereagh gets a couple of verses:

I met Murder on the way -
He had a mask like Castlereagh -
Very smooth he looked, yet grim;
Seven blood-hounds followed him:

All were fat; and well they might
Be in admirable plight,
For one by one, and two by two,
He tossed the human hearts to chew
Which from his wide cloak he drew.

I can tell you now; it doesn't matter what you read about Castlereagh - nearly 200 years after he killed himself, these verses from The Masque of Anarchy will be there, giving you a fairly graphic idea of why he's none too popular in certain circles.

However, the one place you won't hear about the poem is on the guided tour at Mount Stewart - he is just referred to as "one of the greatest foreign secretaries".

So what was so bad about him? Here's some background:

4. Edith, Marchioness of Londonderry
Castlereagh isn't the only well-known inhabitant of Mount Stewart. I also picked up a book about Edith Londonderry, the wife of the seventh Marquess. It's an interesting read - for 50 years, from her marriage in 1899, she was hob-nobbing with the great and the not-so-great in society (they met Hitler and various other Nazi bigwigs, which damaged their reputation) and the book details all of it. She was responsible for creating the gardens that we see today at Mount Stewart.

5. The Mount Stewart Scone
You're probably dying for a cup of tea and a scone after all that history (I know I was). And we weren't disappointed - the scone was really fresh and tasty. Top marks to Mount Stewart. 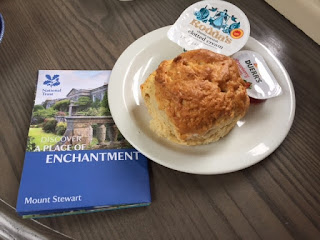 So there you have it. It's probably just as well that I haven't read the Castlereagh book yet, otherwise this post would be twice as long.

Mount Stewart: 5 out of 5
Scone: 5 out of 5
Chances of me having finished my Castlereagh book by Christmas: 1 out of 5

In 2019, I went back to Northern Ireland to complete my rounds. Read more about Carrick-a-Rede, Crom, Castle Coole, Cushendun, Divis and the Black Mountain, White Park Bay, Springhill.
Posted by National Trust Scones at 02:16